The Labyrinth Treasure Hunt[1] was an event in the Yu-Gi-Oh! manga, Toei anime and NAS anime, where Shadi's search for Yami Yugi's soul room became a Shadow Game.

Inside Shadi was surprised to find two soul rooms; one belonging to Yugi, which was filled with toys, and a more sinister-looking room that belonged to Dark Yugi. Dark Yugi was in his soul room and asked why Shadi had come. Shadi explained that he had come to learn the power of the Millennium Puzzle. Dark Yugi replied that the power Shadi spoke of does rest in his soul room, but he wasn't going to let him see it that easily and challenged him to a game. 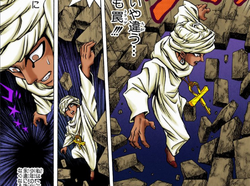 Shadi falls into one of the traps.

The rules of the game were that Dark Yugi's true soul room existed somewhere within his soul and if Shadi could find it, he could then see the power that he seeks. Shadi mentioned that when he enters someone's soul room, he can "redecorate", which can let him control the person and even destroy their personality. He then accepted the challenge. Dark Yugi warned Shadi not to think that the game was easy as it is much more dangerous than he thinks.

In order to find the true room, Shadi began opening the doors one by one. On opening the first one, a stone pillar was dropped from above, which Shadi barely managed to dodge. Dark Yugi laughed and asked if Shadi gave up. He then disappeared through a wall, telling Shadi that he would be waiting in the true room.

Shadi continued to search. He understood that the soul was tightly closed against strangers and set to confuse him, but he was determined to find the room.

Eventually, he found a room, where Dark Yugi was sitting on a throne. He wondered if this was the true room, but as he approached Dark Yugi, the floor under him began to collapse, leaving him dangling from one hand. If he fell, he would be trapped in Dark Yugi's soul forever. However, Dark Yugi held out his hand and helped Shadi back up.

Although he saved Shadi, Dark Yugi still insisted that Shadi leave. Shadi accepted defeat and began to leave. However, Yugi corrected him saying that their game was only beginning.

Shadi then returned to the museum, where Yugi was still standing in front of him. He realized that he had entered Yugi's soul room with the intention of testing him, but wound up being the one tested. He returned the Millennium Puzzle to Yugi, who thanked him. Shadi insisted that he should be the one thanking Yugi, but Yugi didn't understand why that was. As Shadi tried to explain, Yugi laughed at the idea of there being another Yugi. Shadi realized that Yugi was unaware of his other self's existence, so he told Yugi that he must learn about his other self in order to solve the true riddle of the Millennium Puzzle, which is the duty of the one who solved the Millennium Puzzle. Before parting, he told Yugi his name, which he claimed to have never told anyone before.

Shadi then left, planning to put Professor Yoshimori on trial before returning to test Dark Yugi.