Landmine Search Network[1] was a Shadow Game in the Yu-Gi-Oh! manga, between Dark Yugi and Hirutani's gang.

Dark Yugi made a makeshift trap set to trigger after a few seconds. He called the trap a time bomb and the gang needed to find its trigger, in order to avoid being injured.

Hirutani forced Katsuya Jonouchi to rejoin his gang by threatening to beat-up the other kids in Jonouchi's class should he refuse. However after one of the other members punched Yugi Mutou, Jonouchi decided he had enough and started a fight with the rest of the gang later at J'z. The gang overwhelmed Jonouchi and took him to their "torture chamber". Here Jonouchi was tied to a hook hanging from the ceiling, while the other gangsters beat him and shocked him with their stun guns. Jonouchi still managed to knock one of them unconscious by kicking him in the face.

While Yugi, Hiroto Honda and Anzu Mazaki were looking for Jonouchi, Yugi turned to his Millennium Puzzle and asked it to help him find Jonouchi. He then switched to Dark Yugi, who located the gang at the torture chamber. 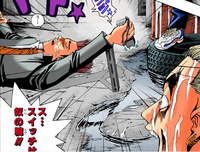 Dark Yugi allowed one of the gangsters to punch him back so he could secretly set up a trap while he stood up: he placed a metal bar under the arm of the gangster Jonouchi had knocked out, causing him to hold his stun gun over a puddle of water, created from rain through a hole in the ceiling. He then tied the Millennium Puzzle to a chain over the gangster's head and stood up on a tire over the puddle.

The gang get electrocuted.

The gangsters thought Dark Yugi was bluffing and prepared to shock them. However Hirutani realized that that they were wet from the rain and after being lured into a puddle. He warned the others not to use their stun guns, since the electricity would otherwise flow into the puddle and shock all of them.

Thinking that their stun guns were the switch Dark Yugi warned them about, the gang proceeded to attack him without using them. However Dark Yugi laughed that they didn't find the switch and it was about to activate. The gangsters then noticed the unconscious member's arm over the puddle. Water then dripped from the Millennium Puzzle onto his forehead, waking him up and causing him to move his arm, which fell into the puddle with his stun gun switched on. The gangsters got shocked, while Dark Yugi was protected by the tire.

Jonouchi had been beaten too badly to see what happened between Dark Yugi and the gang. By the time he regained consciousness, he was untied, Dark Yugi had switched back to Yugi and Anzu and Honda had arrived.