From Yugipedia
Jump to: navigation, search
For other versions of this character, see Lawton (disambiguation).

Lawton, known as Lotten in the Japanese version, is the younger brother of Malcolm and the main antagonist of the Crash Town mini-arc in Yu-Gi-Oh! 5D's. His Japanese name can also be translated as Rotten, due to the the homophonous pronunciation of "L" and "R" in the Japanese language—both spellings were used in episode 89.

Lawton can be ruthless, to the point of throwing dynamite at Yusei, Kalin, Nico and West and even betraying his own brother.[3] Despite this, he is shown to be capable of mercy, deciding not to send Nico and West to the mountains due to their youth. He is also very rational in his Duels, refusing to gamble unless he is certain he'll come out the winner of it. Above all, he states himself to be a realist instead of a Duelist, even favoring to simply kill Yusei and Kalin in midst of a Duel at Barbara's behest.[4][5] 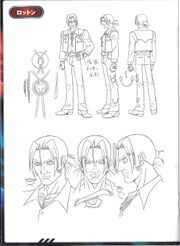 Lawton appears in Crash Town on his Duel Runner, right after the Duel between Yusei Fudo and Kalin Kessler concludes. Yusei is surprised by the Duel Runner, because it resembles a drilling machine.

As Kalin is about to be sent to the mountains, Lawton then challenges Radley to a Duel. However, Lawton is shown to be a skilled Duelist, as he immediately defeats Radley with a First Turn Kill. After defeating him, Lawton forces the members on Radley's group to surrender and join his own, threatening them with a guaranteed life of slavery should they consider otherwise.

After Yusei, Kalin, and Radley are sent to the mountain as slaves, his brother declares that Crash Town is under their control. That same night, they have a big celebration there, where Lawton notices that Yusei's Duel Runner is missing. Lawton along with two other comrades, go to the mountain. They then encounter Yusei, Kalin, West and Nico. As Yusei then stalls Lawton, while Kalin and the two children try to escape, as they are now being chased by Malcolm's men. Then, Yusei challenges Lawton to a Turbo Duel inside the mountain.

Their Duel was fiercely fought, as they both are quickly able to decrease each other's Life Points. Because of Lawton's "Explosive Wall", it ends inconclusively. When the Duel ends, he throws dynamite at Yusei, Kalin, Nico, and West and when it explodes, Yusei and Kalin fall off the mountain, while Nico and West are rendered unconscious on the ground. Lawton takes them back to Barbara Town, renaming it Lawton Town after he and Barbara betray Malcolm (In the dub, Barb is Lawton's wife and had planned to betray Malcolm from the start).

Later, not satisfied with the number of workers in the mines, Lawton and Barb begin forcing their henchmen to Duel for their survival. To their horror, Kalin and Yusei return to put an end to their tyrannical hold on Crash Town. It is agreed that Lawton would Duel both Kalin and Yusei in a 2-on-1 handicap match as long as he started with an opening hand of 10 cards.

Lawton takes the first turn and Summons his signature "Gatling Ogre", sending enough cards with its effect to defeat them on his first turn. Though he successfully reduces Kalin's Life Points to 0 in a single turn, Kalin countered with "Infernity Zero", a monster card that could be Special Summoned when Kalin's Life Points hit 0 and let him stay in the Duel even while his Life Points were at 0.

However, "Infernity Zero" would be destroyed if Kalin takes damage 3 times. Lawton manages to get two successful strikes on Kalin.

The Duel progresses, and eventually Yusei and Kalin manage to gain the upper hand. With Lawton about to lose, he and Barb attempt to make a final getaway but are stopped by Crow Hogan and Jack Atlas. In one last attempt, Lawton detonates explosives in the city to create a diversion, and flees on his Duel Runner. Kalin chases after him on Yusei's Duel Runner and catches up to him in order to finish his last turn.

Lawton, knowing that Kalin's top card is a Spell Card that would render "Infernity Doom Slinger" useless, agrees to finish the Duel. However, Kalin uses the effect of "Infernity Climber" to move it to the top of his Deck in place of "Blaster Cartridge", allowing the effect of "Infernity Doom Slinger" to finish off Lawton. In the dub, the confrontation ends differently. Kalin apprehends Lawton, but denies him a chance to finish the Duel, claiming that he is a coward who does not deserve to end it on the battlefield. Regardless of the ending, Lawton along with Barbara are then taken into custody by Sector Security. 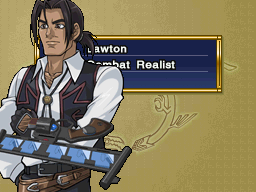 Lawton in Over the Nexus

Lawton appears in Yu-Gi-Oh! 5D's World Championship 2011: Over the Nexus as the final opponent fought in the game's fifth chapter. Similarly to his final duel in the anime, the player teams up with Kalin, while Lawton begins the duel with 10 cards in his hand.

After finishing the game, the player can have regular duels against Lawton in the Facility.

Lawton plays a Gun Ogre Deck which focuses on sending Spell and Trap Cards from his field to the Graveyard in order to deal damage to his opponent. Like most residents of Crash Town, his cards have an Old West theme, but his cards reflect the most powerful artillery used in that era, including the Gatling gun and cannons. In the event that he doesn't finish off his opponents during his first turn, he uses monsters that seem to be more powerful evolutions of each other, which also have the effects of being able to Special Summon the previous stage if the more powerful stage is destroyed. He also seems to play a number of Trap Cards that can be activated while in the Graveyard, so he can still activate them while using them as "ammo" at the same time.