Lazar, known as Jaeger (イェーガー, Yēgā) in the Japanese version, sometimes romanized as Yeager, is a character in Yu-Gi-Oh! World Championship video game series. This is a video game depiction of Lazar, a character from the Yu-Gi-Oh! 5D's anime.

The player duels against Lazar at the very end of the storyline to be able to enter Goodwin's mansion. 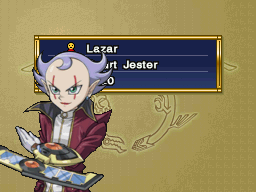 Lazar, in Over the Nexus

Lazar is located in the Stadium's waiting room, and the player can partner with him after defeating him 3 times.

After finishing the game, talking to Lazar directs them to a PC in the waiting room that is behaving strangely. Investigating said computer begins 3 duels in a row against simulations of Team New World.