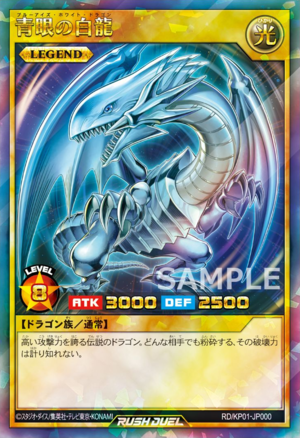 A Legend Card (レジェンドカード Rejendo Kādo) is a type of card exclusive to Yu-Gi-Oh! Rush Duel. Legend Cards are indicated by the icon

Each player can include only 1 Legend Card in their Deck or Extra Deck.

So far, all Legend Cards are OCG/TCG cards imported to the Rush Duel format. They usually have powerful effects or higher ATK/DEF for their Levels (relative to other Rush Duel cards), and are often supported by name by other cards.

Legend Cards are indicated by the Legend Icon (「」アイコン).[1] It is printed on the top left corner of the card's artwork. Normally, the icon is golden in color, but can be other colors depending on the card's rarity; Secret Rare cards have a silver icon, while cards with the Rush Rare SPECIAL RED Ver. rarity have a red icon.

Most Legend Cards are included as high-rarity pulls from booster packs. Deck Modification Packs always introduce a new Legend Monster Card each set, while side sets (such as the Maximum Ultra Packs) always introduce 2 new Legend Spells/Traps each. So far, all Legends included in main sets have been Rush Rares, with later sets also including them in Secret Rare; Legends in side sets have all been Secret Rares. Certain preconstructed decks have also introduced a handful of new Legend Cards in the form of randomized bonus card pools (for example, the Strongest Battle Deck +1 Bonus Card). Additionally, Legend Cards have also been introduced or reprinted as promotional cards.