Lenny, known as Uryu in the Japanese version, is a character in Yu-Gi-Oh! 5D's. His name was not mentioned in the dub, but was used in TV guides and video games.

He has a criminal mark on his face that allows Securities to track him down. He is often accompanied by two lackeys, Lug and Larry.

Lenny was once a resident of New Domino City, but after causing some trouble there, he was sentenced to live in the Satellite ghetto with Larry and Lug, earning them criminal marks. While at a plant in Satellite, he trips up Tank, who was working there. Blitz and Nervin rush back to Tank. Then Lenny mocks the three of them for being from the Satellite (in the dub, he demands Tank for some new shoes), but Blitz notices and points out Lenny's criminal mark, insulted; Lenny attacks him and they all get into a fight.

Later Lenny and his two friends that were with him at the plant find Blitz, Tank and Nervin with Yusei and Rally. They explain that they must thank Blitz, Tank and Nervin because they were after getting cut in their salary for the incident at work. Lenny spots Yusei's Duel Runner and says that it is a waste for residents of Satellite to have one, if they hand it over they won't get any trouble. (In the Japanese version his sentence is only temporary and he wanted Yusei's Duel Runner for when he left. In the dub, his sentence was life and he wanted Yusei's Duel Runner as a means of escape.)

Yusei refuses and Lenny challenges him to a Duel with Yusei's Runner on the line. Yusei Duels him for laughing at his friends and his dream. Yusei wins and recites some meaningful words that Jack told him before. Lenny says sorry for bothering Yusei and that they will Duel again.

During Yusei's Duel against Z-one, he was seeing cheering on Yusei. 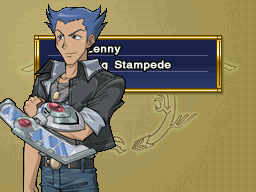 Lenny, in Over the Nexus