The Leo Institute of Dueling (often abbreviated as the Leo Institute or as LID), known as Leo Duel School (レオ・デュエル・スクール Reo Dyueru Sukūru, often abbreviated as LDS Erudīesu) in the Japanese version, is a preparatory Duel school located in Paradise City. It is the most prestigious of the Duel schools and is owned by the Leo Corporation.[2] The school offers courses for Fusion Summoning, Synchro Summoning and Xyz Summoning.[3] Declan Akaba also wants to include Pendulum Summoning in the curriculum. The school is currently headed by Henrietta Akaba. 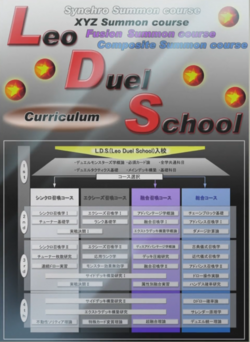