From Yugipedia
(Redirected from Lilly)
Jump to: navigation, search
For the card, see Lillybot (card).

Lillybot, often referred to as just Lilly and known as Obomi (オボミ, Obomi) in the Japanese version, is a litterbot appearing in Yu-Gi-Oh! ZEXAL anime.

Lilly is a blue litterbot that wears Tori Meadows' ribbon on one side of its green protrusions.

Lilly is one of the few sentient robots in the series, but is limited in speech and emotion compared to Orbital 7. According to Tori, she is a female robot. As with most litterbots, it tends to say "cleaning" and "garbage" a lot. It tends to call Yuma "Trash" in several ways, namely "Hetakuso", which in English means "extreme clumsiness", roughly translating it to "clumsy", which often makes him mad. (In the dub, she instead tells him he "stinks", which may or may not be referring to his hygiene.)

Lilly was one of the four litterbots that were controlled by Goda, who had programmed them to play Duel Monsters in order to solve the Duel Puzzles that were required to shut down the security systems at a jewelery store he wished to rob. While escaping by van, Lilly tried to catch up with him, but a family of ducks walked onto the road and the litterbot saved them by storing them inside herself before being knocked into the river.

The next day, Yuma and his friends discovered a duckling, which led them to discover the litterbot washed up on shore with the mother duck inside. After setting the mother duck free, Tori asked Yuma to fix the litterbot, though Yuma had no clue of what to do. Due to one of the cables being severed, Tori helped by lending one of her heart pins to bind the cable, reviving the broken litterbot. After reviving, the litterbot formed a bond with Yuma. After the litterbot defeated Yuma in a Duel, the litterbot took Tori's ribbon and tied it on herself leading Tori to assume it's a female litterbot. This led Tori to name it "Obomina Shining Romanov", which Yuma shortened to Obomi (in the dub, Tori suggested giving her a proper name, and Yuma said he doesn't want to give her a "lame" name like "Lilly-bot", but the litterbot eagerly accepted the name). The three friends enjoyed the day with Lilly, playing basketball, skateboarding, and beating both Yuma and Bronk in a Duel. Lilly stayed the night in Yuma's garage. However, during the night, Goda reactivated his control over Lilly, forcing her to steal for him again. Before she left, Lilly dropped one of her cards, "Star Light, Star Bright". 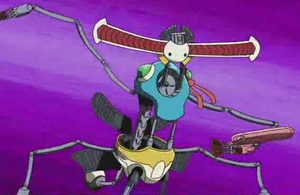 The following morning, after finding Lilly's card, Yuma discovered that Lilly was involved in the recent thefts in the city. Yuma and friends searched for Lilly and confronted Goda. However, he managed to get away as Lilly caused distraction. Yuma Dueled Lilly, hoping that he could snap Lilly out of the thief's control. During the Duel, Goda triggered a 1-minute countdown to blow up the litterbot, but Yuma successfully stopped the countdown by defeating Lilly.

Afterwards, Lilly became a common friend to Yuma and stayed at his house, tossing Yuma the rice balls he eats in tough Duel situations, or doing household chores.

During the course of returning home, Lillybot crashed into Orbital 7. Lillybot smacked him away for crashing into her. Orbital 7 returned to the park, confused about his feelings where he crashed into Lillybot again on her way back home. He then discovered a list she dropped suggesting, "help", or "Tasukete", which he assumed was a call for distress; in reality, it was Lilly's way of remembering what to buy based on the first katakana characters (in the dub, the note says "SAVE ME", which was abbreviated for "SAlt, VEggies, Meat, and Eggs). Orbital 7 followed her to Yuma's home where be believed Yuma was a cruel slave driver and devised a way to save Lillybot, setting up a satellite cannon.

The following day, Orbital challenged Yuma to a Duel in order to save Lillybot. The Duel took place near a river where Yuma, Ray, Tori and Lillybot came to observe. During the Duel, Orbital managed to bring out his ace monster, "Googly-Eyes Drum Dragon", which overwhelmed Yuma. However, Yuma managed to turn the Duel around by Summoning his three "Djinn" monsters and destroying Orbital 7's ace card, winning the Duel. Regardless of the outcome, Orbital had programmed the satellite cannon to fire down on Yuma. Lilly came in close contact with Yuma, mocking him in her own way, but doing so also put her in the line of fire (in the dub, she tells Yuma it's dinner time). Orbital heroically dashed towards her and pushed her out of harm's way as the laser blasted Yuma and Orbital 7. This left the two of them burned. Tori then learned that Orbital 7 had fallen in love with Lillybot and suggested they start off as friends, with Orbital joining hands with Lilly. Lilly kindly responded with a kind first greeting, which made Orbital happy.[1] One night at dinner, Yuma was eating his dinner at a fast pace. Lillybot came in and offered Yuma seconds. The next day, when Yuma tried to leave his home, Haru called out to him. Surprised, Yuma turned around and found his family waiting for him at the door. Lillybot tossed Yuma some Duel lunch, while warning him to be careful.[2]

Later on, Lillybot had Kari's computer lock on to the Duel with Kite and Mizar, and watched the Duel with Kari.[3] She was shown to be happy following Mizar's defeat.[4]

After Yuma's and Astral's final Duel, Lillybot was seen together with Orbital 7 and their two "children", working with the Arclight and Tenjo families to research parallel dimensions.[5]

Lilly plays a "Junk Robot" Deck that uses Machine-Type animal-like monsters that resemble run-down appliances, which symbolize her job as a cleaner.

During the jewel thief's robbery, she played a "Leviair" Deck in a Duel Puzzle in order to disable the security system. The Deck is focused on bringing out the requirements for Xyz Summoning multiple copies of "Leviair".