Litterbots, known as Obots in the Japanese version, are robots in the Yu-Gi-Oh! ZEXAL anime.

They are designed to detect and collect trash around Heartland City. When they find trash, they yell "Garbage!" or "Trash!", then they grab and "eat" it while yelling "Cleaning!". In the dub, they say "Trash identified". Each Litterbot has a number painted on some part of its body. They also appear to have a special D-Pad version each.

They are often used as comic relief, namely giving Yuma Tsukumo a hard time (Yuma crashing into them, confusing Yuma and his Deck as garbage more than once, easily defeating him in a duel, etc.).[1]

They also appear to be used for other purposes such as when they were seen pushing luggage trolleys around Heartland Airport for the World Duel Carnival participants, and helping with construction work and directing machinery. Litterbots where also used during the inauguration parade of the WDC. [2]

When Yuma Dueled Striker in his first duel of the WDC, Striker's "Stadium of Dreams" Field Spell caused a nearby Litterbot to function like a referee, blowing a whistle to simulate a penalty when Striker activated his "Offside Trap". 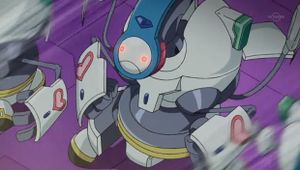 They also seem to have a fighting form similar to Orbital 7's, which were shown when they were reprogrammed by Goda to rob a jewelery store[4] and when they attacked Kite, Shark and Tori.[5]