London Kirishima (ロンドン Kirishima Rondon) is a character in the Yu-Gi-Oh! GO RUSH!! anime. Initially introduced as Manya Atachi's manager, London is later revealed to be a member of the Rovian Bandits. 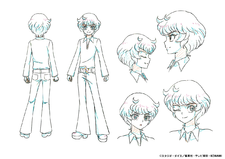 Lineart of Kirishima depicting him from different angles.

Kirishima closely resembles Roa Kassidy from Yu-Gi-Oh! SEVENS. He has green eyes and curly red hair. Kirishima dresses in a stereotypical disco style outfit; he wears a yellow long sleeved polo shirt under a cyan shirt, with a plunging neckline, tucked into a pair of pink pants held up with a white belt that has a golden buckle in the shape of a star, and brown platform shoes with a grey outsole and heel.

Kirishima has a very upbeat attitude, never frowning. He is also very friendly and caring towards Manya, as her manager, taking her luggage for her while thanking her for coming out to appear on Mutsuba Cable TV. He also answers to her needs, ordering her sushi and getting her juice after her duel, while joking with her.

Kirishima accompanied Manya to Mutsuba Town and the Mutsuba Cable Studio for their Rush Duels against the local elementary school team, led by Manya's childhood friend Yuamu Ohdo. Once Manya arrived at Mutsuba Cable TV, Kirishima thanked her for coming while taking her luggage in for her. When Kirishima and Manya entered the waiting room, he also thanked the members of UTS for coming out. Once asked, he left to get Manya the "goods".[3]

Kirishima was due to Duel second after Manya's Rush Duel with Yuamu, but Bochi requested to Duel next, as his former owner Manabu Sogetsu was in attendance and he wanted to see how strong Manabu had become. After Manya's loss to Yuamu, Kirishima brought her a juice and congratulated her, assuring her that her sushi had been ordered and explaining about Bochi's request to her.[4] While Bochi Rush Dueled Manabu, Kirishima waited outside the studio for Manya's sushi, but the delivery boy, Chupataro Kaburagi, instead attacked Kirishima and drained his energy.[4][5]

Kirishima plays a "Arts Angel" Deck comprised of DARK Fairy Type monsters based on Casettes and other old-fashioned, retro instruments and music devices. His DARK Fairy monsters directly contrast the LIGHT Fiend Type "Royal Rebel's" (known as "Royal Demon's" in the Japanese version) monsters used by Roa Kassidy in Yu-Gi-Oh! SEVENS. The primary playstyle of Kirishima's Deck revolves around Defense Position monsters, either as a defensive option, or as a way to inflict damage either through card effects or piercing.