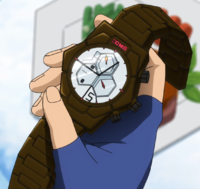 The wristwatch, being held by Yuga Ohdo.

Luke's wristwatch was given to Lucidien "Luke" Kallister by his great-grandfather Akinori Kamijo in Yu-Gi-Oh! SEVENS, and it appears to serve as the basis for his mysterious ability to disable machines. For his part, Luke believes that he is possessed by a devil, calling it Luke Devil.

The watch is made of a brown metal with a hexagonal frame and three hexagons within the face. Curiously, the only hour number emphasized is the "5". The watch has "GOHA" emblazoned on it in red letters.[1]

The wristwatch was given to Luke a year before the series, and it caused machines to begin breaking down around him. Luke came to believe that he was possessed by a devil and he began to make use of it to enter adult Duel centers to practice Duel Monsters.[1][2]

Luke used this ability to disable Yuga Ohdo's Duel Bicycle when they first met so he could tell him about the legend of the King of Duels. He later used it to deactivate the Goha Enterprises Drone that would become Kaizo to prevent it from penalizing them, though it soon reactivated and Luke found himself unable to disable it again.[3] The following day, Luke used this power to deactivate the phones of everyone watching his Rush Duel with Yuga, as he hoped to stop it from being revealed to the world, but he removed his watch before the Duel to put on his Duel Disk, preventing him from stopping Yuga using Kaizo to livestream the Duel.[2] Luke also used his power to deactivate Yuga's Duel Bicycle when he was trying to talk to him about Romin Kassidy.[4]

Luke didn't use the watch for a while afterwards, but made use of it to deactivate the cheat function of Buff Grimes's Duel Disk during his Rush Duel with Romin in the A.I. Restaurant.[5] When they returned to the A.I. Restaurant, the watch caused both a waiter Drone and door to a VIP room to break down. During their meal, Yuga asked Luke about the watch, and as Luke handed it to him to look at, it affected a waiter Drone that Buff Grimes had reprogrammed to kidnap Romin as revenge for defeating him, causing the Drone to kidnap Luke instead. As he didn't have the watch on him, Luke was unable to free himself from the cage that Grimes imprisoned in him or stop Grimes from cheating during their Rush Duel. The watch's functions trapped Yuga, Romin and Gavin Sogetsu in the VIP room, but they were unable to consciously trigger its power when they tried to use it themselves, though Luke did so to open the door to the Garden of Curiosity.[1]

The watch can apparently cause technology to stop working on command, though the specifics are unclear. Luke believes that he can only use the ability twice a day, but the watch has been shown to passively affect technology more than this number.[1][3] Only Luke seems to be able to consciously use the watch.[1] Luke removes his watch whenever he Duels to strap on his Duel Disk, so it does not affect him while he is Dueling.[2] Yuga Ohdo initially believed this to simply be a result of the Pauli effect, but later realizes that this ability is connected to the watch.[1][2]