Lulu's bracelet, known as Ruri's bracelet (のブレスレット Ruri no Buresuretto) in the Japanese version, is one of the Four Dimension Bracelets item owned by Lulu Obsidian and formerly owned by Ray Akaba. The bracelet represents Xyz Summoning in the Yu-Gi-Oh! ARC-V anime.

It is a thin, single banded bracelet with a wing-shaped design framing a yellow, diamond-shaped jewel.

The metallic wing pieces paralleling each other are reminiscent of the creation of the overlay network in an Xyz Summon. The design might also be inspired by "the traditional themes of natural beauty in Japanese aesthetics" (), representing "" (bird) for Lulu and her Winged Beast deck - Lyrilusc. Also, Lulu wears bird-representative feather accessories for earrings and hair clips. 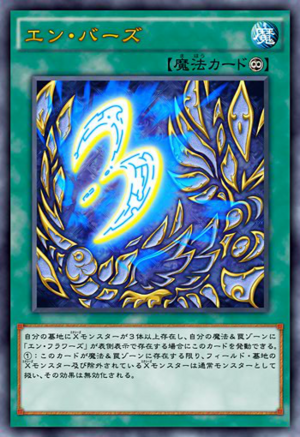 The bracelet was originally a card created by Leo Akaba using natural energy from birds. It was used with the other three cards to confront Z-ARC, however, Ray took them from her father in order to oppose Z-ARC herself. During the Duel, the card took its shape as the bracelet and appeared on Ray's right arm. Along with the others, the bracelet helped her stop Supreme King Z-ARC, and split him, along with herself and the Original Dimension. Later, Lulu gained ownership of the bracelet.[1]

Lulu wore this bracelet when observing Dennis' magic show in Heartland, who identified her precisely because of it and lead to her capture by Yuri.[2]

When Lulu was transferred into the ARC-V Reactor[3], her bracelet returned to its card form. It was then taken with the other three cards by Leo to use against Z-ARC again, but they were destroyed by Z-ARC, who defeated Leo.[4] However, using Riley's body, Ray retrieved the Four Nature Cards from the Graveyard and activated them to slowly strip away "Supreme King Z-ARC's" protection effects and causing the Four Dimension Bracelets to materialize on Riley's arm. With Yuya's help, Ray defeated Z-ARC again with the effects of the Four Nature Cards and Riley sealed away Z-ARC's spirit within her own body to prevent his soul from being split again.[5]

Following the battle against Z-ARC and the Standard Dimension's rebirth into the "Pendulum Dimension", the bracelet disappeared following Riley's regression into an infant.[6]