Lumis, known as Mask of Light in the Japanese version, is an opponent in Yu-Gi-Oh! Nightmare Troubadour. This is a videogame depiction of Lumis, a character from the Yu-Gi-Oh! anime and manga.

Lumis can intercept the player while they move around the first map at night to force them into Shadow Games after Ishizu Ishtar gives the player an Egyptian God Card. 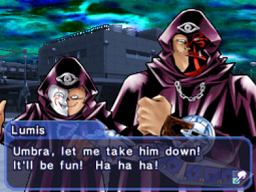 Lumis and Umbra intercept the player together and they use the same dialgue, sans their final line, regardless of who is the player's opponent. However, they use different character icons on the map, and which one of the two is going to challenge the player depends on whose icon it is.