"Lyrilusc", known as "Lyrical Luscinia" ( Ririkaru Rusukinia) in the OCG, is an archetype of Level/Rank 1 WIND Winged Beast monsters used by Lulu Obsidian in the Yu-Gi-Oh! ARC-V anime. 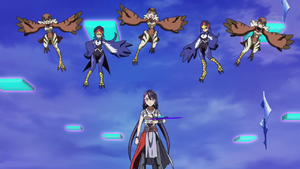 The archetype's name is a reference to Luscinia, a genus of passerine birds that includes most nightingales. The initialism of the name being "LL" is likely meant to mirror "Raidraptor" ("RR"), as both archetypes are used by the Obsidian siblings. The TCG name is a shortened version of the OCG one.

Every member is named after a passerine; the Main Deck monsters also use a blue mineral/gemstone (which may a reference to the fact that Lulu's Japanese name, Ruri, means "lapis lazuli"), while the Xyz Monsters seem to use words that refer to gatherings of people.

The "Lyrilusc" archetype consists of Level 1 monsters focused on Rank 1 Xyz Summon tactics. They possess swarming and searching effects to aid in quickly gathering many monsters to Summon their Xyz Monsters, who become stronger the more Xyz Materials they possess. "Assembled Nightingale" gains ATK for each of its material, can attack as many times as its materials while it has any, and has an innate Direct attack effect. "Recital Starling" can help boost the ATK of another monster on the field while also tutoring even more "Lyrilusc" from the Deck. "Promenade Thrush" can help sweep away Spells/Traps that might potentially hinder plays and boost another attacking monster's ATK. "Ensemblue Robin" can help removing monsters from the opponent's field and recover another "Lyrilusc" when it fell. With a good field setup and enough materials, "Assembled Nightingale" can quickly OTK the opponent without much problem. Otherwise, "Assambled Nightingale" can also be used as Fusion Material for "Independent Nightingale", whose ATK and burn effect can become massive depending on the number of Xyz Materials attached to the fused monsters.

Despite their ability to quickly bring out their main powerhouse to dish high amount of battle damage, and massive protection against battle, targeting, and effect-based destruction, cards that can negate their effect or flip them face down such as Skill Drain or Swords of Concealing Light will shut them down. Additionally, since they rely on gaining ATK through card effects while having 0 natural ATK and DEF, cards that force monsters to utilize their original ATK or abuse Piercing battle damage while forcing the opponent into Defense Position can greatly endanger the archetype.