Mach is the spirit of "Number 44: Sky Pegasus" in the Yu-Gi-Oh! ZEXAL anime. He was originally Dumon's pegasus steed who later became a "Number" Guardian with the role of protecting his "Mythyrian Number" form until Yuma and Astral proved worthy of wielding it. 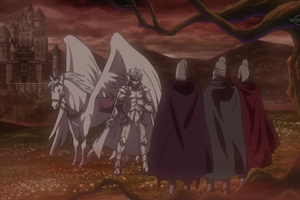 Mach as a Pegasus.

In the distant past, Mach was a pegasus who served a knight, later revealed to be Dumon. When Vector attacked the United Lands of the Poseidon Ocean he offered a blood sacrifice to Abyss Splash the Roaring Waterfall Deity in order to finish the battle after his Gorgonic Guardians were destroyed. Rio Kastle offered herself as a sacrifice seemingly to Abyss and Sir Dumon riding on Mach attempted to save her, although Princess Rio actually sacrificed herself to revive another god.[1]

Later, three knights who lived in Dumon's land were manipulated by Don Thousand[2] and attempted to usurp the King, but were intercepted by Mach and Dumon. Since the hero was unwilling to kill his former comrades, both master and steed were eventually defeated and killed. However, Dumon's fellow knights regretted their actions and they buried him and Mach together. Mach later became the "Number" spirit of "Number 44: Sky Pegasus", while his master was reborn as a Barian.[3] 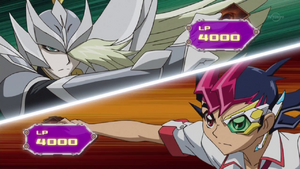 Upon entering the first set of ruins, Yuma was separated from Shark and the mysterious boy, "Nash" who he saved earlier. After exploring the temple further, Yuma was confronted by Mach before he could grab the Sacred "Number" card that was contained in the Ruin. Mach then began a Duel with Yuma with Shark's and "Nash's" lives on the line.[4] As the Duel continued, Shark and "Nash" eventually ended up finding runes which explained Mach's story and its relevance to his Duel strategy, which enabled Yuma to win the Duel. Afterwards, Mach entrusted Yuma with his "Number" card before disappearing.[3]

Mach uses a "Druid" Deck focusing on the effects "Labyrinth of Decisions" and "Unfair Treaty", which forces his opponent to pay the cost of "Labyrinth", which can lower Life Points very quickly when used with the effect of his "Number", while also eliminating the cards in his opponent's hand.