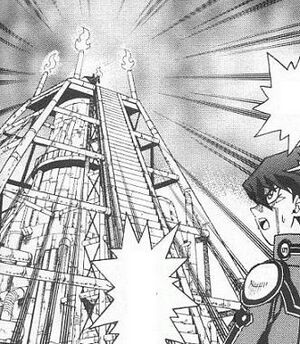 The Machine Temple was a structure which appeared in a Satellite factory after Sect Ijuin performed a ritual, Summoning the Skeleton Knight.[1]

The temple is pyramid-shaped, with a flat top. There are four poles with flaming torches at the top in each corner. It consists largely of pipes and has a stairway, leading to the top.

Sect Ijuin performed the ritual to Summon the Skeleton Knight, after losing to Yusei. The knight appeared along with the temple. He saw Sect unfit to be given the rare cards, he had prayed for, so he took Sect captive at the top of the temple.[1]

Yusei Turbo Dueled the Skeleton Knight in order to save Sect. The knight caused flaming walls to appear around the temple and throughout the factory, creating the circuit.[2] Yusei defeated the knight, causing him and the temple to disappear.[3]

The temple appears again when the Skeleton Knight interrupts the Duel between Sect and Jack Atlas. Seeing that he is not ready to use the dark power that he has given him, the Skeleton Knight takes Sect away so he can master the powers of darkness, putting an end to the duel. Afterwards they and the temple vanish, leaving Yusei and Jack puzzled over what happened.[4]