Priest Mahado and Bakura, King of Thieves faced each other in a Diaha, in the Yu-Gi-Oh! manga. A similar version of this battle takes place in the anime.

The battle took place at the former tomb of Akhenamkhanen. During the battle, Mahado gave his life and merged with his ka, Magus of Illusion to become the Dark Magician. Despite Mahado winning, Bakura managed to survive and steal the Millennium Ring.

When Mahado first acquired the Millennium Ring, it possessed a dark power, which he believed it had gotten by absorbing the evil of the last priest who wore it. He used his own power to suppress the evil powers of the ring, for the safety of everyone else. Due to the magic, he invested in this, his powers otherwise appeared significantly weaker, including the strength of his spirit ka, the Magus of Illusion.[1]

Seto had been critical of Mahado's ka in the Diaha with Bakura, at the pharaoh's palace.[2] and during the mock Diaha. At its level, he considered it unfit to protect the pharaoh's tomb.[3] 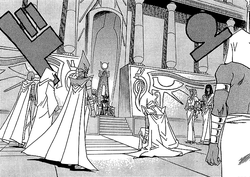 Mahado pledges to protect the tomb.

Security was tightened at Akhenamkhanen's tomb, in caution of another raid from Bakura. As captain of the royal guard, Mahado commanded the soldiers at the tomb. Siamun Muran stressed the importance of setting new traps, rather than repairing the old ones and Mahado affirmed that there was a new trap sure to stop any thief. Seto was not totally convinced suggested that Mahado not be given another chance and be stripped of his priesthood the next time the tomb got robbed. Siamun reminded Seto that was the pharaoh's decision to make. Pharaoh Atem then advised Mahado to not be blinded by his guilt and to focus on fulfilling his duties.[1]

Siamun, cautious that Mahado plans to fight Bakura himself

When Mahado was departing to the tomb, Siamun stopped him to remind him that his duty was solely to inspect and reinforce the guard at the Valley of the Kings. He knew Mahado was considering using his own spirit to defeat Bakura, but told him it was not strong enough and they would need the combined power of the pharaoh and priests to defeat Bakura.[1]

Mahado asked Siamun about ka's strength growing with the hatred of their host. Siamun replied that it was not just hatred but the strength of their heart. In place of hatred, Mahado believed himself to have enough devotion to the pharaoh to strengthen his ka. Because the pharaoh forgave him for his failure, he was willing to stake his life for his duty.[1]

Mahado guarded the inside of the tomb, while his troops were stationed outside and tasked with letting no creature near the holy place. Before entering the tomb, he sensed Bakura's presence with the Millennium Ring. Bakura watched Mahado going inside and seeing only five guards at the entrance thought it would be easy to go after him.[1] 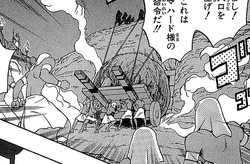 The tomb, being sealed

Bakura quickly dispatched the soldiers at the entrance and walked inside. At a bridge, he was faced by Mahado, who said he had been waiting for him. Outside the tomb, the soldiers, following Mahado's orders, blocked the entrance with a boulder and erected a stone slab. If Mahado was to die fighting Bakura, his soul would take form on the tablet. If that happened before the third sunrise, they were to leave the tomb sealed forever.[1]

Bakura suspected Akhenamkhanen was not buried in the tomb. Mahado confirmed that they buried him elsewhere and were to use this tomb for Bakura. Bakura told him not be getting ahead of himself, since he had not fallen for the trap. He had no interest in taking Akhenamkhanen's mummy again and claimed to have come for the Millennium Ring.[1]

Bakura summoned Diabound, who having fed on his hatred, had grown stronger since their last Diaha.[1]

With no fear of innocent bystanders being hurt, while he was in the tomb, Mahado was able to refocus his powers from suppressing the evil of the Millennium Ring to strengthening his ka. Consequently, when he summoned the Magus of Illusion it was also significantly more powerful than their last battle.[1] 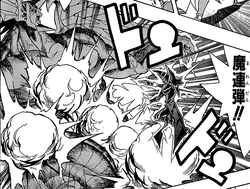 Magus of Illusion and Diabound, battling

Diabound used its "Venom Blast" attack, but the Magus of Illusion moved quicker than Bakura expected it could. It dodged the attack and while Mahado chanted a spell, struck Diabound with its "Magic Blast" attack. Mahado then transferred his heka to the magus, allowing it to attack again with its "Magic Bullets". The attack had some impact on Diabound, who then disappeared with its wall-phasing ability.[4]

Bakura commended Mahado on being able to use his heka to double his ka's power and deduced that he must be a spirit sorcerer. Just like a wizard has ways of fighting, Bakura said that a thief also has ways of fighting, as he deliberately triggered a trap, causing giant axes to swing like pendulums over the bridge. While Mahado took care to dodge the axes, Bakura climbed up on one and laughed at the irony in him being able to use the traps set for thieves to his advantage.[4] 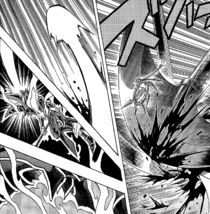 Mahado dies and merges with the Magus of Illusion.

Unable to move without being cut by an axe, Mahado knew he was vulnerable to an attack from Diabound. He ordered the Magus of Illusion to attack before then, but was too late as Diabound appeared above him. Diabound used its "Spiral Surge" attack to strike Mahado and the magus.[4]

Bakura laughed and said that Mahado could regret his foolishness in hell and that he would kill the priests one by one and take their Millennium Items. However Mahado remained standing and cast a single-use spell, in which a spirit sorcerer can give their life to fuse their ka with their ba. He was then sliced by one of the axes. In death, his soul exited his body and fused with the Magus of Illusion, forming the Dark Magician.[4]

As Dark Magician, Mahado hit Bakura with his "Black Magic" attack, damaging both Bakura and Diabound and causing Bakura to fall from the bridge.[4] 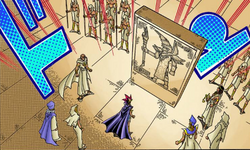 Mahado's tablet, brought before the pharaoh

Outside the tomb, the Dark Magician took form the slab the soldiers had erected. The slab was taken to the pharaoh's palace and the soldiers explained to Atem what had happened. Seto demanded to know if Bakura had been killed and if the Millennium Ring had been stolen. The soldiers did not know for definite, but reported that they had not seen anyone escape the tomb.[4]

While the pharaoh and priests discussed locating Bakura, Siamun asked Isis if the Millennium Tauk's future showed any signs of Bakura. She checked, but could find no sign of him. Seto blamed Mahado for putting them in this state and asked why Isis did not predict his rashness ahead of time. She explained that she cannot see the future of a Millennium Item holder. From that, Siamun inferred that since she could not see Bakura, he must be dead or have acquired the Millennium Ring.[5]

Isis sent her spirit, Spiria to search the city and telepathically show her what she sees. Seto asked the pharaoh's permission to take men to the city in search for Bakura, secretly intending to perform the ka hunt.[5]

Mahado's apprentice, Mana, burst into the palace, where she wept in front of her master's tablet. She begged Atem to call his spirit from the tablet, but Isis insisted Mahado be given time to rest after his battle and reminded her that her heka was not yet strong enough to see spirits. Out of respect to Mahado, Mana vowed to become an amazing magician.[5]

Seto suggested they "cast [their] tears into the Nile" and focus on finding Bakura. He reminded Atem of his request to search the city and Atem consented, but instructed Seto to not harm anyone other than Bakura.[5]

Bakura survived the battle and managed to take the Millennium Ring. He made his way to an inn, where he traded a piece of stolen gold for food. Some opportunistic criminals saw the treasure Bakura had and attempted to attack him, only to be massacred by Diabound.[6]