Mai Valentine is a video game depiction of Mai Valentine, a character from the Yu-Gi-Oh! anime. She is available as 2 different Super Partners, with a default of 5 Rental Points (as opposed to a Legend Partner, like most partners based on characters from the anime). Her normal partner version has a partner ID of P114, while her Orichalcos version has a partner ID of P124.

She also appeared as an opponent under Duel Monsters Arena mode, using her normal avatar image.

As a partner, Mai was only obtainable through 2 special events, lasting from:

Once players received the normal version as a partner, they could increase her Rental Point maximum by 1 (and simultaneously fully refresh them) by qualifying to receive her again during that first time period, up to a maximum of 8 Rental Points.

A mighty female duelist who manipulates Amazonesses and Harpies. She is tough yet jolly, and she takes good care of others. She can't act amiably toward Joey Wheeler, who gave a boost to her transformation.

You need 1 million more years of experience before defeating me!

This deck is designed to feature "Harpie Lady". Use "Harpie Channeler" or "Hysteric Party" to Special Summon "Harpie" and back it up with powerful Spell & Trap Cards. Side Deck mainly consists of strategic cards that help you control or ward off the effects of your opponent's Spell & Trap Cards. 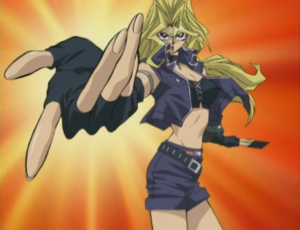