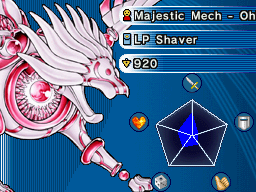 Majestic Mech - Ohka is a Level 3 Limited Duel opponent that challenges the player to defeat it in a duel that begins with both players having 4000 LP.

Majestic Mech - Ohka appears as a Tag Duel opponent in World Championship Mode, partnering with Asura Priest. They can be unlocked by defeating Bolt and Blister in Tag Duels 10 times in Duel World Mode.