Malcolm is a resident of Crash Town.

Malcolm is the leader of the Malcolm Crew, one of the two gangs of Crash Town. The other gang, the Radley Bunch, belongs to Radley. According to another resident, Barbara, the two of them came to form their groups as a violent way of forcing people to work in the Dyne mines as slaves. Furthermore, these two group use Duels to force people to work.

Malcolm is first seen losing one of his members in a Duel against Kalin Kessler, the champion of Radley's group. In anger, he drinks excessively, and is later met by Yusei Fudo. Yusei asks to join his gang, and Malcolm tests him in a three-on-one Duel against other members. He is amazed as Yusei executes a triple One Turn Kill. Malcolm accepts him, counting that Yusei will defeat Kalin.

After Yusei's Duel with Kalin, Malcolm and Barb double-cross him. Malcolm´s brother, Lawton, suddenly appears and defeats Radley in a Duel. Malcolm offers Yusei the chance to remain in his gang because of his impressive Dueling skills, but Yusei refuses. Yusei, Kalin and Radley are then sent to the mountains, and Malcolm declares that his family now officially rules the town.

At first, Barbara is with him and he even tells her that he'll rename the town and change it instead to "Barbara Town". However Malcolm himself ends up being double-crossed by his own brother and Barb too (with the latter giving him a swift kick). As she favors Lawton, the town name becomes "Lawton Town".

Most of the members on his group wear a red scarf. 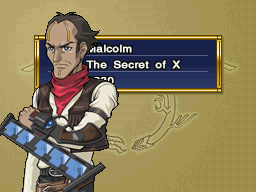 Malcolm, in Over the Nexus

Malcolm appears in Yu-Gi-Oh! 5D's World Championship 2011: Over the Nexus, with a similar role to his anime counterpart. He is faced during Chapter 5 and is arrested as the chapter ends, but the player can have rematches against him in the Facility after the main storyline.