"Malefic", known as "Sin" ( Shin) in the OCG, is an archetype of cards which were introduced in the Yu-Gi-Oh! 3D Bonds Beyond Time movie. They are used by Paradox, and are almost exclusively corrupted versions of existing monsters.

Paradox claims that they are the most powerful cards in history, due to the fact that they aren't bound to Normal Summoning rules. 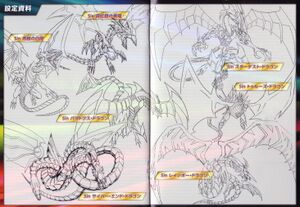 The Japanese name for this archetype, "Sin", is meant as a pun on the words for "truth" ("shin") and "sin" ("tsumi"), alluding to the truth of human nature as seen by Paradox - that humanity's errors have led to the world's destruction.

The English name "Malefic" means "having or asserting a negative influence", referring to how these cards are corrupted versions of existing cards.

Many "Malefic" monsters have mechanical-looking pieces of their body which are made of a mix of white, grey and black metal, including wings and face-plates (and, in the case of "Malefic Stardust Dragon", knee and torso plates). Their faces have masks similar to that of Paradox, with the right side black, the left side white and line patterns that cover the eyes ("Malefic Cyber End Dragon" also has its far right head black and far left white). "Malefic Blue-Eyes White Dragon" and "Malefic Red-Eyes Black Dragon" are the only "Malefic" monsters whose right eye is not covered by their masks.

Most of the monsters in this archetype are corrupted versions of other monsters (most of which are counterparts of well-known Dragons). The remaining four monsters look similar, but have no known non-Malefic counterparts.

The "Malefic" archetype has an aggro-beatdown playing style, through the employment of various high-Level DARK monsters strong effects and good ATK values. Most "Malefic" monsters are Special Summoned via banishing their original counterparts from the hand, Deck, or Extra Deck while a Field Spell is present. As they destroy themselves when there is no active Field Spell, "Malefic Stardust Dragon" is an incredibly useful monster for the Deck, protecting any active Field Spells while on the field. Their own Field Spell is "Malefic World", which allows the player to forfeit their Normal draw in favor of adding any "Malefic" monster from their Deck to their hand, albeit at the opponent's mercy. Said Field Spell is easily searched by not only "Terraforming", but their own "Malefic Territory", which not only provides targeting protection from the likes of "Cosmic Cyclone" but also removes a glaring weakness of most of the stronger members of the archetype: The inability to control more than 1 "Malefic" monster - by altering the effect to instead prevent multiple copies of that monster being on the field - and allowing all your monsters to attack while controlling a "Malefic" monster though at the cost of any battle-related effects a "Malefic" monster may have. Another pair of key cards are "Malefic Parallel Gear" and "Malefic Paradox Gear", as the former simply allows you to Synchro Summon a Synchro Monster by using another "Malefic" monster from your hand as the non-Tuner material; "Paradox Gear" can Tribute itself to Special Summon "Parallel Gear" from the Deck and add 1 other "Malefic" monster from the Deck to your hand, while acting as the original counterpart for any of the high-Level members. Through these monsters, not only is the player capable of easily Synchro Summoning very powerful monsters but also make quick use of any "Malefic" Dragons they have in-hand.

Unlike other members of the archetype, "Malefic Red-Eyes Black Dragon" and "Malefic Blue-Eyes White Dragon" can be Special Summoned from the GY after they're Summoned properly first, allowing "Red-Eyes Darkness Metal Dragon" to quickly make a Link Monster with them or act as additional beatsicks. "Malefic Selector" adds yet another layer of searching though it restricts the player from searching the same monsters banished and with the same name as each other. "Malefic Divide" is also essentially a Quick-Play Spell "Monster Reborn" for the archetype. Finally, "Malefic Tune" can be used in a pinch for more draws and yet more searching although its status as a Trap Card makes it slower and more likely to be destroyed before the effect can be applied.