From Yugipedia
(Redirected from Manabu)
Jump to: navigation, search

Manabu Sogetsu (マナブ Sōgetsu Manabu) is a character in the Yu-Gi-Oh! GO RUSH!! anime. He is the person in charge of MIK's (The Organization for Monitoring Interstellar Kriminals) Mutsuba Town branch,[2] dedicated to cracking down on aliens who come to Earth without proper authorization, and is partnered with Nyandestar, who he makes daily rounds with.[3] 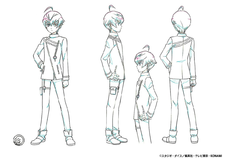 Lineart of Manabu depicting him from different angles.

Manabu closely resembles Gavin Sogetsu. He is a tall boy with blue eyes and neatly styled purple-black hair with an ahoge (a strand of hair standing up at the top). His fringe is styled into a point with two large bangs framing his eyes and two smaller ones between those and his fringe. The rest of his hair clipped back over his ears with a cross-shaped hairpin. Manabu wears a black overlapping jacket with a white lining, silver cuffs and a blue line over the left side of his body connected to a silver ring clipped onto his jacket. He also wears dark grey pants with a Deck box strapped to his right thigh by a cord tied in the same manner as the ring on his jacket, and charcoal slip-on shoes with long cuffs, and grey soles and bindings.

When he disguises himself as a client for UTS, Manabu wears a purple wig, orange sunglasses, a large yellow scarf, a gold watch, and a pale blue suit with a pink waistcoat and white undershirt. The colors resemble The☆Professor Gavin's outfit.

Manabu presents himself as strict and no-nonsense, dedicated to upholding the principles of MIK and enforcing them. He is depicted as honorable, both in positive and negative aspects; during his Rush Duel with Yudias Velgear, he consoled him over struggling with Tributing his monsters, assuring him it wasn't meaninglessly sacrificing them, while he previously refused to Rush Duel Yuhi Ohdo because he was careless enough to leave his cards outside. After Yudias defeated him, Manabu kept his word to leave him alone as long as he didn't cause trouble.

Despite his stoic façade, Manabu is prone to suddenly exclaiming cat and chemistry puns after uttering certain words, possibly due to a neurological disorder.

Manabu was born to be the heir of the Sogetsu Style, and trained to master all types of martial arts, but he hated having to use it to hurt people. One day, he met Bochi, who he played with to get him through his days training. Once his instructors found this out, he was sent away to the mountains for intense training. On return, Bochi had gone, leaving only paw-prints that led to larger footsteps by a broken fence. Believing that Bochi had been taken by aliens, Manabu left the Sogetsu Style to join MIK to find and save Bochi.[4]

Manabu and Nyandestar watched footage of Yuhi and Yuamu Ohdo, who ran UTS, disappearing into an invisible spaceship they had been tracking. Manabu decided to investigate more thoroughly, and knowing UTS also took on odd jobs he disguised himself as a client and asked for their help in locating his dog. However Yuamu instantly realized he was lying due to spotting Nyandestar's hair on his clothes instead of dog hair, and Manabu and Nyandestar revealed themselves, Manabu confiscating cards from Yuhi that had come in contact with an alien and refusing to Rush Duel him over the matter for being so careless. The alien Manabu had been tracking, Yudias Velgear, then entered the room and claimed half the blame lay with him as Yuhi had been showing him how to Rush Duel, talking Manabu into Rush Dueling him by appealing to his warrior's spirit with the condition Manabu would let them go if he lost. Manabu and Yudias Rush Dueled outside, Manabu dealing damage on his first turn with his "Cremation Dog Nitros", but Yudias Summoned several Galaxy Type monsters, including the 1600 ATK Level 4 "Transamu Rainac" and depleted over half of Manabu's LP. Manabu counterattacked with "Blast Examiner", destroying all of Yudias' monsters and reducing him to 500 LP, but on his next turn Yudias hesitated to move. Having noted Yudias' reaction to his own Tribute Summon and the card he'd drawn, Manabu deduced Yudias had drawn a high-Level monster, but that he didn't want to sacrifice his own monsters needlessly. Manabu assured Yudias it wasn't needless, as the monsters they Tributed had entrusted their Duelists with victory, and was shocked when a spotlight shone on Yudias as he celebrated gaining new knowledge. Yudias then Tribute Summoned "Galactica Oblivion", defeating Manabu. Manabu agreed to let them go, but chastised the Ohdo twins for almost engaging the eighty MIK agents on the premises. To Manabu's shock, Yuamu revealed Yudias' spaceship Valvelgear, explaining it could change its size and contained 8.8 million Velgians. Manabu and Nyandestar quickly retreated with as much dignity as they could, Manabu warning Yudias and the Ohdo twins not to cause problems.[5]

Manabu and Nyandestar learned of serial attacks across Mutsuba Town and tracked down the culprit, Chupataro Kaburagi, though UTS had already found him. Chupataro refused to be arrested, so Yuamu challenged him to a Rush Duel, a prospect Manabu agreed with after Yudias reminded him a Rush Duel was the tool of a warrior. During the Duel Manabu learned Chupataro intended to collect as many "Magical Sheep Girl Meeeg-chan" as possible in hopes of meeting the real one, prompting Manabu to dub him a dangerous alien. Yuamu successfully defeated Chupataro and got him to stop his attacks, allowing Manabu and Nyandestar to take him away. Chupataro proved uncooperative to interrogation, eventually showing Manabu a Gold Earth Permit and claiming his family had served as the inspiration for chupacabras, meaning MIK had no jurisdiction over him and forcing them to release him.[6] However the following Sunday Yuamu called Manabu and explained Yudias had gone missing due to Chupataro's actions, and had tracked them to the Mutsuba Heavy Machinery Garbage Collection Site #8. Manabu, Nyandestar and several MIK agents arrived just in time to save Yuhi from being attacked by Chupataro and arrested him, warning him his Gold Earth Permit would be revoked for trespassing, Manabu ignoring Chupataro's protests. They let Yuhi and Yudias go free due to their aid in capturing Chupataro.[7] Chupataro again refused to cooperate; Manabu was only able to succeed in making him tear up at the mention of his family. Nyandestar revealed to Manabu that Chupataro had been communicating with someone from Velgear, so Manabu and Nyandestar went to Kappa Heavenly Cleaning, where Yudias, Yuhi and Yuamu currently were, to ask Yudias if he knew who it might be.[8] Manabu and Nyandestar later responded to an alert in a warehouse, finding Zuwijo zir Velgear and Mitsuko Hiramori with Yudias, Yuhi and Yuamu. They successfully captured Mitsuko, but Zuwijo escaped, much to Manabu's frustration.[9]

Due to their work capturing interstellar kriminals, Manabu and Nyandestar were given an afternoon off, which they spent at CAFÉ. Unfortunately Yuhi and Yudias drove through their table on an out-of-control tractor, scooping Manabu and Nyandestar up. They were informed the tractor couldn't be stopped unless Yudias answered all 100 Saikyo Rush Duel questions, a requirement that prevented the more experienced Manabu from answering himself. Manabu and Nyandestar were forced to watch Yudias slowly answer the questions, and he reached the 100th question as the tractor drove towards a cliff. Yudias struggled with the final question, naming all the Types in the game, but eventually recited them all in a rap, successfully stopping the tractor on the edge of the cliff. A pigeon then perched on the tractor, overbalancing it, though they were rescued by Valvelgear.[10]

Manabu and Nyandestar investigated another alien report, leading to Mutsuba Cable Studio. Manabu spotted a small shadow entering the live stage and he, Nyandestar and the MIK agents accompanying them barged onstage, but found no trace of the alien and sat in the audience after the MC asked them to. They watched the ensuing Rush Duel between Yuamu and Manya Atachi, Manabu asking in bewilderment what was going on after the Duel concluded and the girls claimed they had been acting conflict between them, but Nyandestar suddenly sensed traces of an alien.[11] To Manabu's surprise, Manya chose him as the second Duelist to represent the local team, Dueling her dog Bochi, the same Bochi that Manabu had known while training. Manabu was overjoyed to see Bochi, but shocked when Bochi transformed and revealed he was an alien, accusing Manabu of abandoning him. Bochi told Manabu he would be forgiven if he won their Rush Duel, but would become Bochi and Manya's dog if he lost, conditions Manabu agreed to. Although Bochi Summoned the high-Level "Heartless Hound Thunder Emperor Drainu", Manabu was able to lower its ATK and destroy it with "Blast Examiner", strategies Bochi congratulated Manabu's Sogetsu Style for. Surprised Bochi knew the name, Manabu explained the Sogetsu Style and his past to everyone present, claiming he didn't regret leaving Sogetsu Style as it had allowed him to meet Bochi again. Bochi in turn revealed he had tried to infiltrate Sogetsu Style through Manabu to destroy it with his Wicked Fist of the Beloved Dog. He Summoned "Heartless Hound Martial Master Shiba" and revived "Drainu", depleting most of Manabu's LP. Deciding the experiment was over, Manabu warned Bochi he would be stopped if he intended to disturb the peace and he Summoned "Chemicalize Salamander", using its effect to take advantage of the large number of monsters Bochi had sent to the Graveyard to lower the ATK of his monsters and defeat him. After the Duel Bochi burst into proud tears, explaining he had long given up the Wicked Fist of the Beloved Dog style to become Manya's protector and had simply wanted to test Manabu's skills, begging forgiveness for manipulating him in the past. Manabu forgave Bochi, accepting that Bochi was happy by Manya's side.[4]

Although Manabu's victory had won the matches for the local team, Manabu not being a UTS member convinced everyone to continue the Duels. Before they could, Chupataro broke through a wall and demanded to Rush Duel.[4] Manabu was shocked Chupataro had escaped the MIK Headquarters and ordered his capture after learning they couldn't contact HQ, though Chupataro threatened everyone in the room. Bochi was unable to stop Chupataro, having used up his power Dueling Manabu, so Yudias accepted Chupataro's challenge despite Manabu and Yuhi warning him they didn't know Chupataro's plans. Yudias gained a significant lead over Chupataro when the latter used a Trap to reduce the ATK of his monster just to draw "Magical Sheep Girl Meeeg-chan". To Manabu's shock, a strange substance emerged from Chupataro's Duel Disk when he Summoned "Meeeg-chan", physically materializing her. Manabu then learned Mitsuko had orchestrated the escape of Chupataro and several other aliens, having been captured on purpose. Magical Sheep Girl Meeeg-chan destroyed Yudias' monsters and physically attacked him, so Manabu tried to stop the Duel, but Yudias continued after learning a monster physically materializing was not a rule violation. Meeeg-chan attacked Yudias again during his own turn, his monsters unable to protect him as they were still only Solid Vision, but Yudias again insisted on Dueling fairly to win, succeeding in Summoning and powering up "Galactica Oblivion" to defeat Meeeg-chan, causing her to vanish. Manabu and the MIK agents had Chupataro and his Duel Disk taken away afterwards.[12]

Manabu uses a FIRE Pyro Deck, focused on cards that reflect a symbiosis of fire and chemistry, and effects that revolve around inflicting effect damage and recycling cards in the Graveyard for cost to boost ATK values.