Manya Atachi (マニャ Atachi Manya) is a character in Yu-Gi-Oh! GO RUSH!!. She is a childhood friend of Yuamu Ohdo who moved away from Mutsuba Town to become an actress.

Full-body view of Manya in her main outfit.

Manya resembles Mimi Imimi, though unlike Mimi she is genuinely a child. She has curly brown hair and pink eyes. Manya's most common outfit is a pink dress and a white vest tied with a black ribbon and patterned with a gold snowflake on each side. She also wears a large white beret with cherries patterned on it, long white socks, and pink Mary Jane shoes.

When advertising the monthly Saikyo Rush Duel magazine, her hair turns a bright pink with a yellow headband. she wears a bright blue dress with a white line going down the center, a blue cape, blue arm guards with yellow around the edges, and a yellow belt with a red buckle 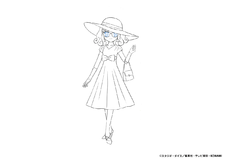 Lineart of Manya in her white dress.

As an actress, Manya has an extensive wardrobe; she wears a white dress, sunhat and dark sunglasses when returning to Mutsuba Town for the first time.

In her youth she wore a yellow dress while at preschool with Yuamu Ohdo. When she first joined a talent agency, Manya had her hair in pigtails and wore blue dungarees over a lighter blue shirt and a red purse around her neck. She wore the same outfit as "Dian Keto the Cure Maiden" in her role on The Cure Maiden, though she retained her brown hair as opposed to "Dian Keto's" green.

Manya is a girl who is a great actress, as shown when she acted as a spoiled and entitled brat in front of her childhood friend Yuamu, to the point that she becomes one with her characters. However, when she isn't acting she is a kind and sweet girl. During her Duel with Yuamu she coined in lines from previous roles she was in to hint to her that she is acting.

Manya was friends with Yuamu Ohdo in preschool, and often spent time with her outside the class keeping up with the trends. At a young age, Manya moved from Mutsuba Town to become an actress, Yuamu promising she would watch everything Manya appeared in. After joining a talent agency, she was only able to get small modeling roles, and was bullied by her seniors. While walking alone in the rain, she found Bochi alone in a box. After telling him to not give up, she realized that those were the words that she herself needed to hear and adopted the dog. After 88 auditions, she landed the main character role on a TV show called The Cure Maiden, which became a massive success and allowed Manya to land many other roles, including as a presenter of Learning the Fun Way – Ultimate Go Rush.[2] Bochi eventually revealed himself to be an alien, and acted as Manya's protector.[3]

Manya, Bochi and her manager London Kirishima returned to Mutsuba Town to Rush Duel against a local elementary school team in Learning the Fun Way – Ultimate Go Rush. Manya decided to stretch her acting, acting as though she detested being back in town and didn't remember Yuamu, who was in the team Manya would be facing alongside her brother Yuhi and their friend Yudias Velgear. Manya ordered London to order sushi for her before the live broadcast of the matches begun, and she decided off-script she would Duel in the first match, to the dismay of MC Makeru Kurimoto. Yuamu likewise Dueled first for the UTS team, taking an early lead despite Manya's Field Spell Card tactics. Throughout the Duel Manya acted as though the Duel was causing her to remember her time with Yuamu and that she was fighting against those memories, using "Dian Keto the Cure Maiden" to impress the power she'd gained from her time in the big city upon Yuamu. However Yuamu Summoned "Blue-Tooth Burst Dragon" and used its effect to destroy Manya's lower-Level monsters and power up "Blue-Tooth", defeating Manya. With her loss, Manya quoted her own character from Runaway Actress Girl, which Yuamu recognized and confirmed she'd known Manya had been acting the entire time. Manya admitted it had been nostalgic, recalling the times she and Yuamu had acted together in their youth.[2]

When they broke for commercial, Manya asked London where her sushi was and London explained it was on the way, explaining Bochi wanted to Duel next due to his former owner, MIK agent Manabu Sogetsu, being in the audience. Manya once again went off-script onstage to introduce Manabu and Bochi as the next Duelists, while also tricking the audience into thinking Bochi's transformation was due to CGI. During the Duel, Manya explained Special Summons from the Graveyard and Bochi's strategy to the audience. Manabu eventually defeated Bochi, pleasing the alien with his strength, and Bochi admitted his deception to Manabu, Manya explaining he had wanted to test Manabu's strength. Although Manya's team had technically lost, Yuhi still wanted to Duel and stated Manabu's victory didn't count as he hadn't been a member of their team, so Manya moved ahead with the third round, intending to have London Duel.[3] However, Chupataro Kaburagi broke through the wall and demanded to Rush Duel instead, explaining he had attacked and incapacitated London. Though initially unworried by Chupataro, Manya asked Bochi to protect her for the sake of the audience, though Bochi reverted to his dog form due to using his power Dueling Manabu, so Yudias accepted Chupataro's challenge, revealing he was an alien too. Manya was attracted by Yudias' appearance despite Yuamu pointing out she already had an alien companion. Manya was intrigued by Yudias' Galaxy Type monsters, but to her utter shock a substance emerged from Chupataro's Duel Disk and brought his "Magical Sheep Girl Meeeg-chan" to life. Meeeg-chan took over the Duel for Chupataro, believing Bochi and Yudias to be characters from her lore and physically attacking Yudias, but Yudias was able to defeat her, causing her to disappear, while Chupataro was taken away by MIK.[4]

Manya uses a Bubble Actress Deck themed around retrains of older female monsters in the form of child actors and rain/bubbles, and a strategy that revolves around gaining LP and cycling through various Field Spells that manipulate ATK values.