Marauding Captain appears as one of Duel Monster Spirits who protected a village in Duel Monsters Spirit World from the Supreme King's army. However, like the rest of his comrades he was defeated by the enemy leader in a Duel and died as a result.[1] 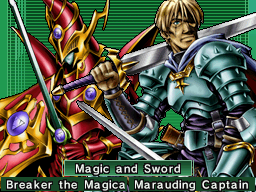 Marauding Captain appears as a Tag Duel opponent partnered with Breaker the Magical Warrior. They can be unlocked by listening to the Tag Duel explanation in Story Mode.