Marcel Bonaparte, known in Japan as Martin Kanou, is a new student entering Ra Yellow in the third season. Through Yubel's possession he acts as the main antagonist for the second arc of the season. 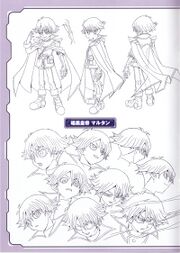 Marcel's design incorporates multiple layers of clothing and a wide range of expressions. Depicted here is the Duelist from front, side, and rear alongside views of his head from different angles.

Marcel speaks in a French accent in the English dub, except for when he is possessed by Yubel. When he speaks without his accent, it is actually Yubel speaking through him. This incarnate of her is akin to a split personality for Marcel, as it refers to itself as "your best friend" when consoling Marcel when he thought he had no friends. In the original version, Yubel used her own voice when she possessed Marcel more often.

Marcel is Vice-Chancellor Jean-Louis Bonaparte's son, raised by the man's ex-wife, Joséphine. He grew depressed by the sight of his parents bickering and later his father leaving their home in Paris at a young age. He is first seen during the third season, a Ra Yellow student who is friends with Blair Flannigan. He is shown with her during the party Adrian threw at the Obelisk Blue dorm. After being transported an alternate Sand Dimension, Marcel is targeted as a host and subsequently possessed by Yubel's, the mysterious demon that Thelonious Viper was helping, due to the strong darkness in his heart in part from his parents split when he was younger. Under Yubels control, he then turns many students and faculty members into Duel Ghouls and plans to unleash the Sacred Beasts before declaring himself king of his newly-instituted empire.

During the Duel with Jaden Yuki and Jesse Anderson, Marcel is set free from the creature's influence when Yubel regains physical form. After Duel Academy is restored to its proper place, Marcel recuperates but not before being checked on by Blair while Bonaparte apologizes for making him depressed in the first place. Marcel is seen again prior to when the Duel Academy students go to see if everybody made it back.

He leaves the academy in the beginning of the fourth season, to spend more time with his father.

Marcel plays two Decks while possessed by Yubel. The first is an Exodia Deck. By using cards such as "Mad Reloader" and "Break the Seal", he is able to quickly gather the individual pieces of Exodia and declare an automatic victory. The second Deck is a Sacred Beast Deck. He boosts the Summoning speed of the "Sacred Beasts": and also supports the Summoning of their combined form, "Chaos Phantasm Armityle". He was never seen dueling on-screen without being possessed so his real deck is unknown.

It's unknown which of the Decks each of these cards belong to, but he never played them in a Duel.