Marincess (マリンセス Marinsesu) is an archetype of WATER Cyberse monsters used by Blue Maiden in the Yu-Gi-Oh! VRAINS anime.

The archetype displays some similarities with "Trickstars", which have also been used by Skye. Nearly all the members are females dressed in colorful idol-like attires (each using a shade of blue somewhere), inspired by, and incorporating accessories based on, the physical traits of sea creatures (several of which being poisonous ones). Main Deck monsters tend to be younger girls, while Link Monsters are often older women. 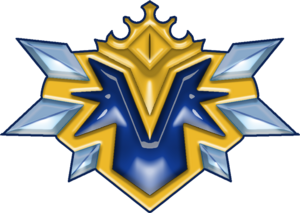 The archetype's crest seems to be an heart-shaped golden jewel with an intricate, deep blue gem embedded in the center, as well as six lighter-blue crystals arranged on the rim. Almost all members wear it somewhere in their outfits, usually as badge.

The Main Deck members "Marincess" monsters have effects that Special Summon themselves from the hand when an Extra Deck member is on the field to facilitate further Link Summoning. The Extra Deck members, in turn, have effects such as Special Summoning more of their members from the GY or add cards from the GY to their hand. The archetype also has Normal Trap Cards that may have additional effects if the player controls "Marincess" Link Monsters with higher Link Rating, and by controlling at least a Link-3 "Marincess" Link Monster, some of those traps can turn into literal hand-traps to distrupt counterplays.

As more "Marincess" cards were released, the archetype's playing style now shifted towards banishing and equipping "Marincess" Link Monsters in the GY to ones the player controls. Some Main Deck "Marincess" monsters have effects related to banishing, and most of them can banish themselves from the GY to activate various effects. Any of those banished "Marincess" monsters can be Special Summoned back to the player's side of the field using the effect of one of the archetype's ace monsters, "Marincess Great Bubble Reef", by exchanging it with 1 WATER monster in the hand. In addition, "Great Bubble Reef" is also packed with its own banishing effect during each player's Standby Phase to let the player draw a card. Furthermore, this banishing strategy would gradually, but temporarily, boost "Great Bubble Reef's" ATK by 600 each time a monster is banished face-up. Most Link-2 and higher "Marincess" Link Monsters need WATER monsters as Link Materials, thus "Scrypton" is a good addition since it is a WATER Cyberse monster and can Special Summon itself from the hand by banishing 1 Cyberse monster in the GY. Also, it can recycle any banished monster back into the Deck after it is sent to the GY for the Link Summon of a Cyberse Link Monster.

Through careful planning, a "Marincess" Deck can achieve an Extra Link within 2-3 turns using their own gameplay and the archetype's Link Monsters. The player can access Extra Link situation by combining both the banishing strategy and the equip-based strategy of this archetype, especially via "Great Bubble Reef" and "Aqua Argonaut". It is also possible to instantly rearrange the position of "Marincess" Link Monsters on the Main Monster Zone so that each may be co-linked, by using the effect of "Marincess Cascade".

By using a single "Marincess" monster, this archetype can perform multiple Link Summons and climb up to a Link-4 "Marincess" Link Monster. This is mainly supported due to toolbox strategy the archetype offered through fast Special Summoning and recycling effects among their Main Deck and Extra Deck monsters. By Normal Summoning "Marincess Sea Horse" alone, the player can subsequently Link Summon at least up to the Link-3 "Marincess Marbled Rock" in the same turn, without reducing the number of cards in their hand.

This combo was demonstrated by Skye Zaizen in the Yu-Gi-Oh! VRAINS episode 09090: "For a Friend", during her Duel against Bohman, and also impressed Ai for the play.

A more complex combo to access stronger "Marincess" Link Monster can be explored via "Marincess Pascalus" and "Marincess Blue Tang":