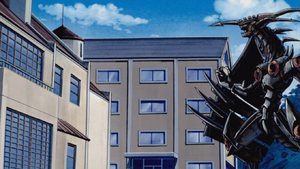 Martha's house is a location in Satellite where Martha and a number of orphans and other people with less-than-ideal lives live.

After Yusei Fudo was injured during his Duel with Kalin Kessler, he was taken to Martha's house to recover. Throughout his recovery, Yusei stayed here to fix his Duel Runner. He also spoke with Akiza Izinski's father here, during her stay in the Hospital.

During the Signer's return to Satellite, after the Dark Signer's attacked, Yusei and the others landed near the orphanage to check up on everyone.

About a year later, Bashford became a resident at Martha's and built a Stardust Dragon statue outside.