Mayday Walker, known as Tobio Habara in the Japanese version, is the husband of Brooke Walker and a Pro-Duelist appearing in the Yu-Gi-Oh! ZEXAL anime. 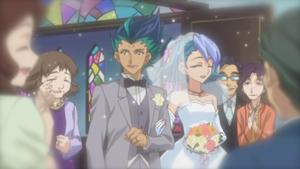 Mayday and Brooke on their wedding day

Mayday and Brooke were a couple that just got married. After the wedding, they become a pro Dueling couple.[1]

They were invited to participate at the Heartland Academy Fun Fair for a Couples Duel tournament. Unknown to him, Brooke was brainwashed by Vector moments before he came to get her. At the tournament, Mayday encountered his wife's friend and guest from their wedding, Anna Kaboom, who had stolen a school uniform from Tori Meadows to pose as a student in order to angrily confront Brooke to learn why she wanted to quit Dueling. Mayday tried to help Brooke explain why she wanted to quit Dueling, but they decided to settle things with a Tag-Team Duel against Anna and her partner, Yuma Tsukumo. The Duel started with Mayday Summoning "Indestructible Airship Hindenkraft". Supporting one another with card effects, they then Summoned "Skypalace Gangaridai". Mayday used "Gangaridai" to destroy Anna's "Superdreadnought Rail Cannon Gustav Max" and then launched a direct attack against Yuma.[1]

After Yuma used "Half Unbreak" to survive the attack, Mayday was impressed and praised him. Mayday continued to protect his wife from other attacks, but was shocked by her sudden change in character when she drew "Rank-Up-Magic Barian's Force". Brooke gave Mayday control of "CXyz Skypalace Babylon" and was ordered by her to win the Duel no matter what, much to his confusion. After she was defeated, Mayday caught her before she violently fell to the ground and was relieved that she returned to normal. In the evening, Mayday chatted with Yuma and confirmed to Anna that he and Brooke were going to have a baby together. He was surprised when his wife pushed Anna towards Yuma and watched as the pair fell down a flight of stairs.[2] 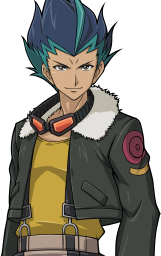