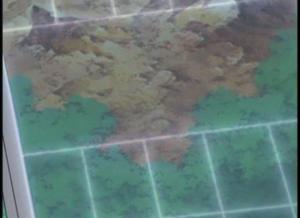 The Meadow field (also known as Sogen, Grassland, and Plain) was shown briefly in Duelist Kingdom. It was used by Joey Wheeler to power-up his Warrior monsters. In the manga, it is specified that the Meadow also powers up Beast-Warrior monsters, but Katsuya Jonouchi's "Battle Steer" received no advantage (although it's possible that it was played in the wrong Zone).

In early video games, the field can be changed to Meadow by activating "Sogen", which grants the ATK and DEF changing effects of Sogen to the affected area.