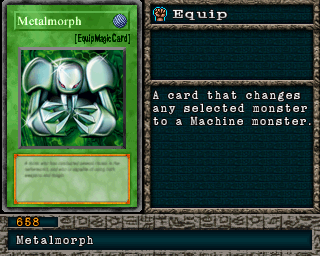 "Metalmorph" can be won via random drop from the following characters, when the player scores one of the listed ratings. The chance of winning it is listed as a percentage and a probability out of 2048.

The following characters can use "Metalmorph". The chances for each of the 40 cards in their Deck being "Metalmorph" is listed as a percentage and a probability out of 2048.

The following is listed as a valid equip target in the game's code. Although players cannot technically equip this card to anything. Instead they can fuse it with certain cards. The presence of a valid equip target can however trick the AI into fusing the two cards. Under normal circumstances, the AI will not attempt to fuse Equip Cards currently on the field with monsters.