Miho Nosaka is a major character in the Toei Yu-Gi-Oh! anime and Yu-Gi-Oh! the Movie.

Miho appeared once in the manga in a story where Hiroto Honda bought her a love jigsaw puzzle. In Toei's anime, she was made into a main character, alongside Yugi Mutou, Anzu Mazaki, Hiroto Honda and Jonouchi. Her role and personality in the anime are significantly different, and Honda has a massive crush on Miho throughout the series. The jigsaw puzzle story is changed in the anime to revolve around Mayumi buying the puzzle for Jonouchi.

Miho's usual outfit is the Domino High School's girls' uniform. She has lilac hair that is fixed in a ponytail and usually has a yellow ribbon on top. Miho is fair skinned.

Miho is cheerful and flirty, though she can also be a stubborn and resilient girl who nonetheless cares deeply for her friends' safety. She sometimes refers to herself as in third person. Miho shows signs of being a typical fangirl, squealing at any given moment when an attractive male (mainly Ryo Bakura) walks past. Much like Honda, she is a romanticist at heart. However, Miho can also be naive and at times a little dim-witted and oblivious to the feelings of those around her, much to Honda's dismay. However, it is also hinted that Miho is aware of Honda’s crush on her, as she often says things in front of Honda on purpose so he will volunteer to do things for her.

If someone hurts her friends, she becomes serious, and she will come to their defense, as evidenced when she confronted Warashibe for giving Anzu, Honda and Jonouchi polluted water and making them sick.

Miho is Anzu Mazaki's best friend and a close friend of Yugi Mutou, Katsuya Jonouchi, Hiroto Honda, who is madly in love with her, and Ryo Bakura.

Miho entered the classroom while Jonouchi was tormenting Yugi. She said that the cafeteria line was long, and she had had nothing for lunch, prompting Honda to volunteer to buy her lunch.[3] 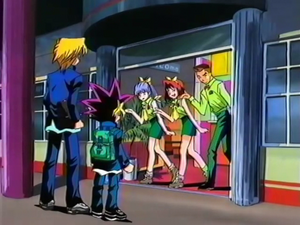 After school one day, Jonouchi and Yugi agreed to go to Burger World on the way home. Honda disagreed as it would be against school rules. Miho enthusiastically said that she'd like to go, causing Honda to change his mind. Anzu tried to discourage them from going, by saying she'd heard bad things about the place and reminded them of the escaped convict, Jiro the Jorogumo. Jonouchi noted how Anzu had been acting weird lately and not accompanying them on their way home from school over the last few days. He wondered if Anzu could be dating older men for pay. Miho, not wanting Anzu to live such a life, followed her home to tried and "rescue her". However she found Anzu was actually working in Burger World, but keeping it a secret as part-time jobs were against school rules. Miho too got a job at Burger World, wanting the extra money to buy things. She accompanied Anzu on her way home after school the next day. Honda suspected Miho was also dating for pay and followed, resulting in him getting a job too, wanting the extra money to buy stuff for Miho. The three were followed home by Yugi and Jonouchi the next day. Two escaped convicts entered Burger World that day and one of them wound up taking Anzu hostage. Miho, Honda and Anzu quit after this incident. Honda and Miho however got a new job at a noodle shop.[4]

Miho was invited to Seto Kaiba's mansion along with the rest of Yugi's friends. She was immediately fond of Kaiba because of his wealth, making Honda jealous.[5]

Honda was convinced by Miho to get up early to wait in line to buy a D-Shock watch for her. However the watch got stolen by Shotaro Akaboshi, while Honda wasn't paying attention. At the arcade when Miho arrived to collect the watch, Honda discovered it was missing and stripped down to his underwear while searching his clothes for it. Miho slapped him and ran off crying. Dark Yugi won the watch back in a Game of Darkness and had it returned to Honda, who passed it on to Miho. Two days later, Honda offered to wait in line to buy Miho perfume. She was delighted to receive more from Hirota.[6] 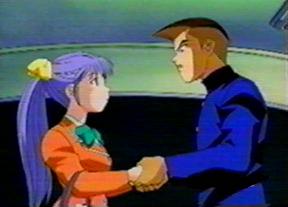 Miho got a Digital Pet and hoped to win the prize holiday in an upcoming tournament. However she didn't want to spend time training the pet for the tournament herself, so she made sure to say this in front of Honda, who volunteered to take care of the pet. Honda took days off school and returned with the pet, now named Super Strawberry, which he used to defeat Kujirada's pet Devil Master, who was after eating Anzu and Jonouchi's pets. Haiyama, who had been manipulating Kujirada, kidnapped Miho and left a note. Honda got whipped by Haiyama, as he attempted to rescue Miho. While he was unconscious, Dark Yugi defeated Haiyama in a Digital Pet duel. As Miho lay unconscious on Honda, she spoke about going on the holiday, but with her mother rather than Honda.[7] 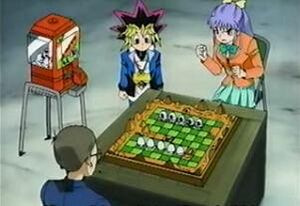 Miho faces Warashibe in a game of Capsule Monster Chess.

The college student, Warashibe, desperately tried to win Miho's affection, by sending her Capsule Monster Chess pieces as presents. Warashibe pretended to be a hero in front of Miho by saving her from a guy, who was really Yugi in disguise. However, Miho recognized Yugi and Warashibe's appearance which didn't meet her expectations. Warashibe tried to invite Miho to his secret base, but she refused and slapped him after getting too creeped out. Embarrassed by what happened, Warashibe poisoned Miho's friends, prompting her to confront him. Yugi led her to Warashibes's base, where she was forced into a game of Capsule Monster Chess. Upon realizing that Warashibe had rigged the dispenser to give Miho the weaker monsters, Miho angrily got up to leave. Warashibe refused to let them leave, as he wanted to put Miho in a giant CapMon capsule. He quickly closed his gate, which broke, causing a part of it to hit Miho and Yugi, knocking them out. Yugi changed to Dark Yugi, who finished the Capsule Monster Chess game, defeating Warashibe and rescuing Miho.[9]

When Yugi and Anzu went to Domino Park together, Miho, Jonouchi, and Honda investigated to see if it's a date. Miho lashed at Honda after he suggested that they go to the pool, so he could see her in a swimsuit. Regardless, she still spent time with Honda in the pool. She managed to get out of the park during the evacuation when there was a bomb scare, but returned after the bomber was captured.[10]

Miho congratulated Yugi after he received a love letter from Risa Kageyama and asked Anzu if she felt jealous. She continued to spy on Yugi's love life, by hiding in the bushes with the rest of his friends to watch Yugi meeting Risa.[11] 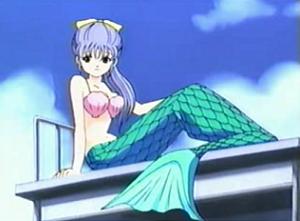 Miho in the mermaid costume.

Honda tried talking Miho into taking part in a beauty pageant. After Miho fell for Bakura, she agreed to do it. Fellow contestant, Kaoruko Himekoji and her supporter, the Student Council Chairman, tried to sabotage Miho's chances of winning. Miho performed majorette dancing in the first round. The chairman had her swimsuit torn-up for the next round, but Miho improvised and wore a mermaid costume from the school drama supplies. Before the final round, Kaoruko mugged Miho and tore her dress. Dark Yugi then defeated Kaoruko in a Shadow Game, causing her to withdraw from the competition as well.[12]

Miho also helps her friends during the Death T and the Monster World arcs.

In Yu-Gi-Oh! The Movie she hung out with her friends at school and had a laugh with them. Miho, Honda, Yugi and Jounochi head to a card shop to watch Yugi and Jonouchi play a game of Duel Monsters. Much to the gang's shock, they discovered that Anzu now worked there. Miho watched Yugi play the game as he explained it to her. Honda challenged her, but she wanted to watch more. Shougo Aoyama was being picked on because he could not play the game very well. Anzu explained that the child had been there before but was too timid to play.

Miho's final appearance was her having a good time with her friends and Shougo.

Miho Dueled Yugi once, but none of her cards were shown.

Miho and Anzu are best friends. They support each other and rarely fight. Miho likes to tease her when Yugi goes out with another girl. Despite that, both girls are often together.

Miho Nosaka has a crush on Ryo Bakura. When she first met him, she intended on inviting him to her school. Miho strongly defends Ryo even going to the point of saying unrealistic things about him. Ryo is Miho's official love interest.