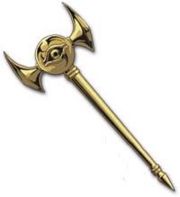 The Millennium Rod ( Sennen Shakujō, Sennen Roddo or Mireniamu Roddo) is a Millennium Item. It is often referred to as the "scepter" in the Japanese version.

Seto had owned the Millennium Rod. Along with the other Items, it was used to resurrect Zorc Necrophades.

One faction of the Tomb Keepers watched over the Rod, along with the Millennium Necklace.

Upon Yami Marik's awakening, he took the Millennium Rod and used the blade to kill his own father (skinning his back off in the manga, stabbing him to death in the Japanese anime, and sending him to the Shadow Realm in the dub). After that, Marik took the Rod to assist him in his quest for world domination. He stated that after he gets his revenge, the Rod would be useless to him, and that he would have no qualms of giving it to Yami Bakura. A false Millennium Rod was created and given to Odion, who was disguising himself as Marik at the time, in order to play his role more realistically. While Odion wielded the false item, Marik (under the pseudonym "Namu") utilized the real Rod's powers in secret, to make it look like Odion is the wielder of the item. When Odion played a false God Card Ra, it incurred the Gods' wrath and caused a lightning bolt to strike down Odion, shattering the false Millennium Rod, revealing Odion's true identity.

In Seto Kaiba's Duel with Ishizu Ishtar, the Millennium Rod showed Kaiba a vision of his past incarnation and the "Blue-Eyes White Dragon", which convinced him to summon the latter monster instead of attacking with Obelisk the Tormentor (which would have caused him to lose the Duel, due to "Sacrifice's Blast"). This is because it was originally owned by the Egyptian Seto, of whom Kaiba is a reincarnation.

After Marik's defeat at Battle City, he gave the Millennium Rod to Yugi. After the Battle Ritual, the Rod, along with the other Millennium Items, fell underground.

"Ma'at" wields a staff that is made up of the Rod and the Millennium Key.

In Yu-Gi-Oh! Forbidden Memories, the Rod is shaped and colored slightly different. It is also owned by Kaiba in the modern day instead of Marik.

This item's unique ability grants the holder the power to control people's minds, turning them into the owner's mind slaves. By extension, it is also capable of mind manipulation, allowing the owner to telepathically communicate with others, look into their memories, trick their minds into believing what the Rod's owner wants them to, even knock people unconscious, and leave a portion of the owner's mind in the people that he has controlled, like with Bakura Ryou and Téa Gardner. Its mind control power has no effect on one who holds a Millennium Item or someone who has a powerful connection to the ancient games that were played in Egypt long ago, like Yugi Muto, Yami Bakura, Seto Kaiba, or Ishizu Ishtar before she gave her item to Yugi. Also, if the victim has an enormous force of will, the spell can be broken.

Like the other Millennium Items, its power over the Shadow Games allows it to materialize and command Duel Monsters and their effects, and cast a Penalty Game against the loser. Marik's games created through this item have been the most brutal and damaging, from memory destruction to pain-inducing.

Its additional magical abilities allow the owner to use a telekinetic-like ability to force an opponent back, and to paralyze them. In the Virtual World arc, Marik commanded the Rod to project destructive energy to destroy the machinery and guard robots, while he was forcing his way through Noah's undersea fortress. It can also show others visions of the past. A victory Duel is not required to use these abilities.

When the Rod was used by Priest Seto, its unique ability was to seal spirit monsters inside of stone tablets.

There is also a short blade concealed in the bottom of the rod, although this was only used in the Japanese anime and manga. The shaft of the rod acts as the sheath. This is removed in the dub. In the Japanese version, this knife was used for the Ishtar clan for carving the symbols on their first born male heir's back. Marik Ishtar was one of the many to endure this painful ritual, against his will, which gave birth to his dark side, Yami Marik.