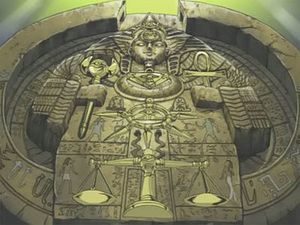 The Millennium Stone is the ancient stone carving where the seven Millennium Items rest and are permanantly sealed.

In the manga, during Pharaoh Akhenamkhanen's reign, the Pharaoh sacrificed part of his spirit to seal a soul within the Stone. That spirit was Hasan, guardian of the Pharaoh.

The Stone was in Kul Elna in the Shrine of the Millennium Stone, and was used by Bakura to put the Items in the Stone in order to summon Zorc Necrophades. When he stole the Millennium Pendant and the Ring, he inserted them in the Stone. Later, during Atem's, the Priests', and Bakura's fight, Mahado attempted to destroy by making a pillar fall on it, so that "Diabound" can expose itself by protecting it. However, it failed when Bakura Summoned "Skeleton Fiend" to protect it.

In the anime only, Bakura seemed to have merged with the tablet, then Zorc emerged, thus destroying the Stone in the process.

In the present, when Marik, Ishizu, Yugi and co. went to the shrine for performing the Ceremonial Battle, Yami inserted the Items into the Stone. Later, after the Battle, the palace started to fall apart, and the Millennium Stone shattered.

The remnants of the Stone are excavated along with fragments of the Millennium Puzzle.