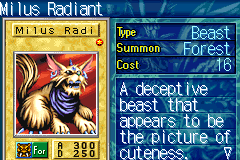 Two copies of "Milus Radiant" are included in the Initial Trunk.

"Milus Radiant" can be purchased in the shop.

The following characters use "Milus Radiant" in their Deck. This list might be incomplete until all opponents have been documented on this site.

See "Milus Radiant" § In other media
Retrieved from "https://yugipedia.com/index.php?title=Milus_Radiant_(ROD)&oldid=4134584"
Categories: