Mina Simington, known as Mikage Sagiri (狭霧深影, Sagiri Mikage) in the Japanese version is a character from the Yu-Gi-Oh! 5D's manga. She is an assistant to Rex Goodwin.

In the Sector Security building, Mina reported to Rex that "he" had arrived in Satellite which pleased Rex. He then asked her to begin the preparations for the D1 Grand Prix which she agreed to.[1] 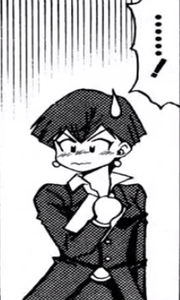 Mina later observed Yusei Fudo's Duel against Greiger along with Jack, Rex and Lazar in the D1 Grand Prix observation tower[2]. When Greiger revealed he was going to perform a One Turn Kill on Yusei, Mina informed the others of Greiger's record, noting his nickname as "The Undefeated Giant" but she was quickly corrected when Jack reminded her of his victory over Greiger. Mina quickly apologized, with Lazar insulting her clumsiness.[3] Mina covered her ears when the sound of Yusei's Cross Sense destroyed Greiger's Duel Runner and damaged the stadium track.[4] When Rex and Lazar were discussing the psychic abilities of Akiza Izinski and Sherry LeBlanc, Mina questioned them on what they meant, but was ignored.[5]

Mina also watched Crow Hogan's Duel with Bolt Tanner and was surprised when Jack enjoyed the Duel.[6] During Yusei's Duel with Hunter Pace, Mina questioned the whereabouts of Lazar.[7] When Jack sensed the use of a "Duel Dragon", Mina questioned where he was going, but he ignored her and rode off on his Duel Runner.[8]