Mind's Labyrinth (の Kokoro no Meikyū)[1] was an event in the Yu-Gi-Oh! manga. 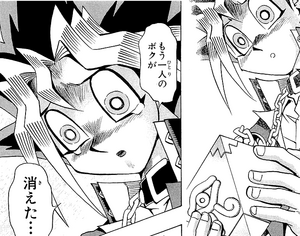 Yugi realizes that Dark Yugi has left his body.

At Domino City Museum, Dark Yugi presented the Egyptian God cards to the slab, as part of the process to regain his memories.[2] This caused his consciousness to be separated from Yugi and taken to another room in the museum to play the Shadow RPG, where he was to control the actions of his past self in the World of Memories.[3]

Yugi was left worried as he reported no trace of Dark Yugi in the Millennium Puzzle or his heart,[4] but Bobasa informed Yugi and his friends that Dark Yugi had traveled to the World of Memories, where he was to re-experience his life as pharaoh, including his death.[5]

Intent on helping Dark Yugi, Yugi and his friends asked Bobasa to take them to the World of Memories.[5] Before doing so, he performed a test of character, using the Millennium Scales to check for traces of evil in their hearts. Yugi, Anzu, Jonouchi and Honda all passed, while Ryo Bakura, whose body also housed Dark Bakura failed. Not permitted to enter, Bakura left, while Bobasa used the Millennium Key to transport the others to Dark Yugi's soul room,[6]

The soul room was a maze of doors and stairs, which the group scanned for a "true door" to take them to the World of Memories.[7]

One of the doors Yugi opened showed a moment of his and Dark Yugi's past, where Dark Yugi nearly killed Seto Kaiba during Duelist Kingdom. Yugi thought that the doors contained Dark Yugi's feelings, as he felt a jab to his chest from opening that door. As the group grew frustrated trying to find the right door, Yugi theorized that the maze was a reflection of their own hearts, not Dark Yugi's, resulting in its complexity increasing in sync with their uneasiness. He got the group to put their hands together in unity and focus on their goal. This caused another door to appear, which led them to the World of Memories.[8] Unbeknownst to them, they were followed by a portion of Dark Bakura's soul, which had been sealed in the Millennium Puzzle.[9]