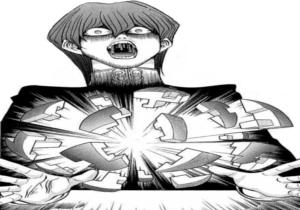 Mind Crush, known as Collapse of the Heart - MIND CRUSH (——の, Maindo Kurasshu - Kokoro no Hōkai) in the Japanese version, was a Penalty Game that Dark Yugi inflicted on Seto Kaiba in the manga at the end of Death-T. It was used to metaphorically shatter Kaiba's heart, destroying the evil that corrupted it and leaving him to reassemble the broken heart as a puzzle. Physically Kaiba remained in a coma until he was ready to reawaken.

In the Yu-Gi-Oh! anime, the term "Mind Crush" has been used for all of Yami Yugi's (Dark Yugi's) Penalty Games, where it has the effect of exorcising an evil spirit or rendering the victim unconscious.

In the Yu-Gi-Oh! ZEXAL manga, Kyoji Yagumo also inflicts a Penalty Game called Mind Crush on Eviluder, causing a spider to appear on his heart.

The card "Mind Crush" is based on the original version of this Penalty Game. 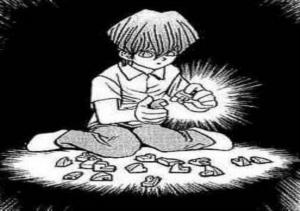 Kaiba, solving the puzzle of his heart.

Seto Kaiba forced Yugi Mutou to participate in Death-T, a theme park designed to kill him. Dark Yugi defeated Kaiba in a game of Duel Monsters in the final stage and inflicted the Mind Crush Penalty Game on him as punishment for his crimes, having presumably realized that the last Penalty Game he had inflicted on Kaiba had not worked. The part of Kaiba's soul that was filled with evil was destroyed and Kaiba was left motionless in his chair, slipping into a coma as a result. Dark Yugi stated to Mokuba that Kaiba was now reassembling the broken puzzle of his heart, one piece at a time and with his own strength so that he would not make any mistakes. He told Mokuba Kaiba that Kaiba would return one day when he completed the puzzle.[1] Mokuba, who had compared Kaiba's change in personality over the last few years to him being possessed by a gaming demon,[2] was glad that Kaiba's evil part had been dispelled and promised to wait forever for him to wake up.[1]

Kaiba spent the next few months in hospital and was sometimes visited by Yugi.[3] The world's best doctors looked at him and thought that he would spend the rest of his life in the coma. He was later put under 24 hour care in Kaiba Manor. Over time, Mokuba came to resent Dark Yugi for doing this to him. Kaiba's absence also gave Maximillion J. Pegasus an opportunity to takeover KaibaCorp.[4] 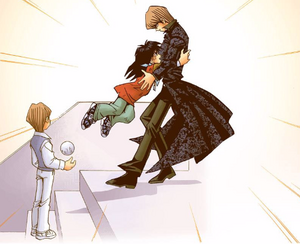 Despite his revival, Kaiba maintained his cruel personality.[6] However, when Yugi saved him from Pegasus, an apparition of his younger self appeared and led him to Mokuba. When the two of them were reunited, the apparition of Kaiba inserted the final piece into the puzzle of his heart.[7] 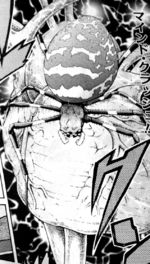 In the Yu-Gi-Oh! ZEXAL manga, Kyoji Yagumo applies a Penalty Game on Eviluder after he loses his Duel against Yuma, and calls it "Mind Crush". He somehow introduced a spider in Eviluder's heart previously, and then makes it attack his heart, which quickly causes him to collapse after feeling enormous pain.