From Yugipedia
Jump to: navigation, search
This article is about minor Rare Hunters in the anime. For other media, see Minor Ghouls (manga) and Minor Ghouls (The Sacred Cards).

The following minor Rare Hunters appear in the Yu-Gi-Oh! anime. 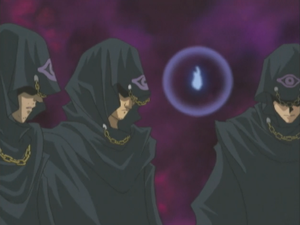 Three Rare Hunters reported the announcement of Battle City to Marik Ishtar and informed him that it meant Duelists throughout Japan would all be gathering in Domino City. Marik replied that it was convenient that all of their prey was gathering in a single location and ordered them to gather Rare Hunters from all over the world.

In the Japanese ending credits, the one with dialogue is called Rare Hunter (レアハンター Reā Hantā) and voiced by Eiji Takemoto.

They are based on Ghouls from the manga; see Minor Ghouls (Duel 151) 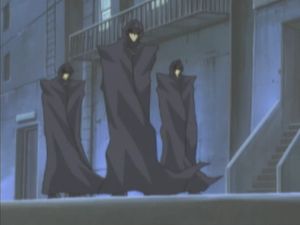 Two minor Rare Hunters accompanied the "Exodia" Rare Hunter when he approached Joey Wheeler for a Duel. The two of them blocked Joey from being able to escape when their ally challenged him to a Duel. When Joey lost the Duel they beat him up, allowing their ally to take his "Red-Eyes B. Dragon".

In the Japanese ending credits, the one with dialogue is called Marik minion (マリクの手下 Mariku no teshita) and voiced by Eiji Takemoto.

They are based on two Ghouls from the manga; see Minor Ghouls (Duel 160). In the manga, the two Ghouls spoke to Marik alone. In the anime, they were accompanied by Odion and some of the minor Rare Hunter's manga dialogue is instead spoken by Odion in the anime.

Marik controlled a Rare Hunters in Domino City and got him to keep an eye on Yugi Muto's friends; Joey Wheeler, Téa Gardner, Tristan Taylor, and Solomon Muto. He was later accompanied by two other Rare Hunters.

The three of them follow the group into Domino City Aquarium, where they watch Joey Duel against Mako Tsunami at the orca show.

While their leader, Marik Ishtar, posed as "Namu" to befriend Joey and Téa, the three Rare Hunters attacked them and took them captive. Yami Yugi rang Téa while the Rare Hunters were restraining her. One of them answered her phone, but hung up without saying anything and smashed the phone. Later, the trio accompanied by Odion surrounded and captured Mokuba Kaiba. The captives were used as leverage to force Yami Yugi and Seto Kaiba to take part in the Fall and Die Explosive Tag Match.

The Rare Hunters locked Téa and Mokuba in a warehouse at Domino Pier. They later caught the two trying to escape out a window by climbing a stack of boxes. They managed to stop Téa ad sent out a search party to look for Mokuba.

A group of Rare Hunters searched for Mokuba Kaiba after Téa Gardner helped his escape from their captivity.