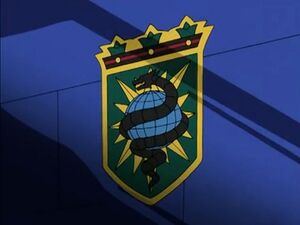 Though a small kingdom, they controlled a satellite that could be used to destroy (brainwash in the dub) all life on the planet.[1]

The name "Misgarth" along with the nation's crest are ostensibly references to Norse mythology: the Japanese name is a phonetic approximation of Miðgarðr [the letter Eth (Ð/ð) being pronounced like the "th" in "there"], the human realm in the Norse cosmology, while the English is merely an adaptation of the Japanese; likewise, the crest depicts the colossal serpent, Jörmungandr, which encircles Miðgarðr (Earth), perhaps alluding to the large-scale power of Misgarth's satellite.