From Yugipedia
Jump to: navigation, search
For the other versions of this character, see Misty Tredwell (disambiguation).

Misty Tredwell, known as Misty Lola in the Japanese version, was a character from Yu-Gi-Oh! 5D's. She is a fashion model, who could read someone based on their facial appearance. She was a member of the Dark Signers with the Lizard dark mark, but was returned to life following Goodwin's defeat. 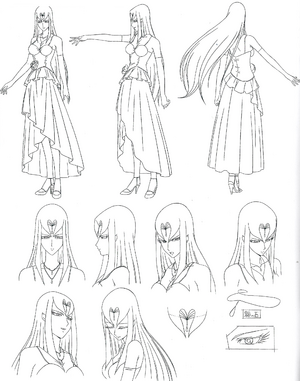 Misty is a tall woman of elegance. She had light-blue eyes as a mortal and as a Dark Signer. She had a gem tied to her forehead and had long black hair with her bangs parted. Her outfit consists of two necklaces, an elegant dress of green, white and yellow and strap-on high heels. On formal occasions, she wore an elegant red dress which was made by one of her designers. 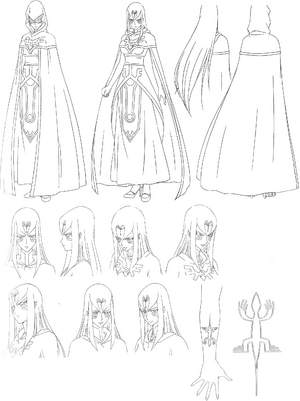 Linework as a Dark Signer.

As a Dark Signer, she wears the black robe of the Dark Signers, accented with green stripes, to match her corresponding Earthbound Immortal, strap-on high heels, and a black and white dress. On her face were marks that resembled inverted wings.

In the dub, her cleavage was edited to make her less suggestive and her clothes less revealing.

Before the death of her younger brother, Misty had a kind and caring personality and showed she really cared deeply for her late younger brother Toby.[1]

Upon her revival as a Dark Signer, Misty still had overall kindness, but showed an immense amount of hatred toward Akiza for believing her to have killed her brother.[2] After learning the truth from Sayer, those feelings toward Akiza disappeared, though the possession from her Earthbound Immortal made her more psychotic in nature, not caring about avenging her little brother, but rather the destruction of her Signer counterpart.[3]

Misty was shown to be gifted with the ability of physiognomy, which she could predict one's future by simply by reading their face, as shown when she did so with Carly and it came true.[4][5] She was also able to show the events of the past through her Sad story cards. When Misty was taken over by her Earthbound Immortal and activated a Trap to send the effect damage back at Akiza, she appeared in the attack, and pleaded to Akiza to protect the world as a Signer.[6][7]

On her birthday, Misty received a red-and-gold circular locket from her brother Toby with a picture of both of them inside.

Having learned of Akiza Izinski's psychic powers just like his, Toby told Misty how he would like to visit the Arcadia Movement. She was then uncertain as he talked to her about wanting to benefit others with his powers (In the dub, having heard bad things about that organization, Misty initially disapproved, which caused an argument).

Unfortunately, Toby was killed during one of Sayer's tests. His body was later found at the Daimon Area, and caused Misty to believe he had been killed by the Black Rose (In the dub, Toby was sent to an unknown facility when he failed to meet Sayer's standards. Also, Misty believed that Akiza was the reason why her brother went missing and disappeared). Upon seeing her brother's body, Misty became so shocked from that incident she lost focus while driving her car and drove it into the ocean. (The English version cut out the latter scene. Here, her car seems to have crashed most likely while it was still on the ground due to her shock).

She was taken to the hospital, where she lingered in a catatonic state. As she was about to die (The English version does not say this, instead it stated that she was unconscious in addition to being in a catatonic state) the Earthbound Immortal Ccarayhua appeared to her to save her from death (in the dub Ccarayuhua offered to help her get revenge on the person who caused her brother's disappearance). This was the beginning of her transformation into a Dark Signer. At the time, Misty did not understand what had happened, but the creature that saved her instructed her to kill the servant of the Crimson Dragon, the Black Rose Dragon.

At some point after her death and rebirth as a Dark Signer, she met Roman and the other Dark Signers, and joined them. She returned to New Domino under the guise of a regular person.

Misty was a world famous model who lived in New Domino City. She attended the Atlas Rising premiere, where she was seen walking through the celebrity red carpet. Misty spotted and took interest in Carly Carmine's face. She even talked to her when she was rushing down to the hospital to question Jack Atlas. Her mysterious words only served to creep Carly out, as she predicted the shadow of death upon her in the near future, but when it happened, they would have a deeper understanding of each other.

Carly arrived at the hotel where Misty was residing. Misty encountered her and invited her in. Carly found out about Misty while researching the Arcadia Movement that her younger brother had been killed by the same organization (In the dub, Toby had disappeared). Misty confirmed this and vowed that she would definitely make the Black Rose, Akiza Izinski, pay for what she did to her younger brother, similar to how Alister did the same thing to Seto Kaiba.

Misty's prediction of Carly's death came true, but Carly was spared, as she transformed into a Dark Signer. The ground then shook violently as the transformation took effect, and alerted Misty, who then proceeded to the Arcadia Movement building to face Akiza.

While Akiza was searching for Sayer, she was confronted by Misty. Misty was honored that Akiza knew who she was and told her that she too was familiar with her, the Black Rose. Although Misty told her that she was seeking revenge, Akiza didn't know what she meant. Misty believed her to be in denial. After Akiza asked "Who are you?", Misty identified herself as a Dark Signer and said they were destined to fight. 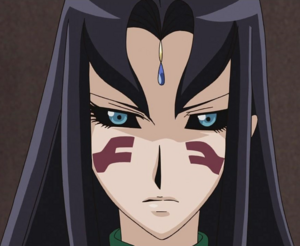 Misty as a Dark Signer.

Misty transformed into her Dark Signer regalia and began the Shadow Duel, and caused the Lizard geoglyph to form around the building. Akiza Summoned "Black Rose Dragon", and proved to Misty that she was a Signer. Shortly after Misty said that she was avenging her brother, who was killed by Akiza, Misty Summoned "Earthbound Immortal Ccarayhua", and sacrificed hundreds of residents inside the geoglyph to do so. The Duel was canceled as the building began to fall apart and Sayer was thrown down the center of the building, due to his and Carly's Shadow Duel in his office on the top floor.

Misty found Carly crying as she prepared to leave the building. Misty told her that she had been chosen by the Earthbound Immortal, and said that her death and subsequent revival as a Dark Signer had already occurred, which proceeded to upset Carly even more to which she said that all of this was hard to take in all at once. Devack then arrived by helicopter to pick up the two Dark Signers.

After Roman's Shadow Duel against Yusei concluded, Misty arrived along with the rest of her comrades, as the final battle between them and the Signers was about to unfold.

Misty waited for Akiza at the Original Enerdy Reactor's Lizard control unit, which was located in an abandoned theme park. She was the last Dark Signer standing, when Akiza arrived. She guided Akiza into a hall of mirrors, where their Duel took place.

During the Duel, Misty's geoglyph did not appear, and Akiza's birthmark didn't react. Misty faced Akiza through the mirrors in the hall. Throughout the Duel, she explained what she believed to be the story of Toby's death, and subsequently her death as a resurrection, and used her "Sad Story" cards to symbolize the events.

Akiza became tormented with the guilt and lost the will to continue the Duel. However, Sayer appeared and saved Akiza from landing into a shard of shattered glass. He manipulated Akiza's mind and reawoke her Black Rose persona. Misty continued to inflict more damage to Akiza, who didn't even flinch. The Black Rose Summoned "Black Rose Dragon", and shattered every mirror in the vicinity. With the mirrors gone, Misty confronted her opponent face-to-face. 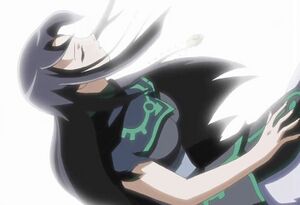 Misty continued the Duel against the Black Rose and Summoned "Ccarayhua". Yusei arrived and managed to trick Sayer into confessing that he was the one who was responsible for Toby's death. After Sayer told her that Toby was weak and useless, Misty's heart was filled with anger, which fueled Ccarayhua to approach Sayer, grab him with its tongue and devour him (in the dub, Sayer was absorbed by Ccarayhua after it snatched him with its tongue). With Sayer dead for good, Misty stated that she had finally avenged her little brother (this also marked the only time that a Dark Signer had succeeded in their goal).

Misty apologized to Akiza and tried to surrender the Duel. However Ccarayhua disallowed it and took control of her. Possessed, Misty proceeded to Duel Akiza, who defended herself. Misty's spirit encouraged Akiza to end the Duel and to protect the world as a Signer. Akiza proceeded to win the Duel, and caused Misty to vanish. As she disappeared, Misty left her locket, which contained a picture of herself and Toby, and her final words were "Now, Akiza... protect this world, as a Signer! Please... remember us" (In the dub, Misty told Akiza to tell Toby that his Elder sister loved him if she ever found him). 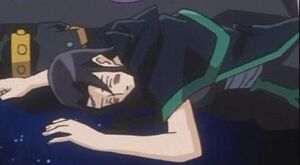 Misty upon returning to life

When Goodwin was defeated in the final battle, and the King of the Netherworld was destroyed, Misty was restored to life, along with the other Dark Signers except for Roman and Goodwin himself as they were the only Dark Signers who had willingly transformed into Dark Signers rather than becoming easy prey for the Earthbound Immortals to prey on to entice into wanting to get revenge on the Signers. 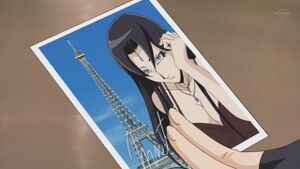 Misty returning to her previous career.

After returning to life, Misty returned to her career as a fashion model and sent a photo postcard from Paris to Akiza, which pleased Akiza as their bitter rivalry had ended and that they had become great friends in the process.

Misty's success in the fashion world was evident throughout the series as many billboards and posters of her could be seen throughout New Domino City such as in the New Domino City Mall when Yusei Fudo and his friends were chasing Lazar in order to obtain information about Iliaster.

During Yusei Fudo's Duel with Z-one when he is about to perform a Limit Over Accel Synchro in space, she could be seen in the image groups of people that were cheering Yusei on.

As a Dark Signer, Misty used a "Reptilianne" Deck which focused around draining the ATK of her opponents to 0. She also used an array of Continuous Spell Cards, namely the "Sad Story" series to support the powerful "Dragon Queen of Tragic Endings and to lock down her opponent. Her Deck was spearheaded by her powerful "Earthbound Immortal Ccarayhua".