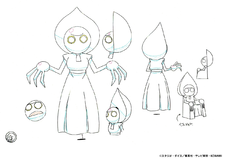 Lineart of Mitsuko depicting her from different angles.

Mitsuko is a giant, 3-meter-tall alien, conceptually based on the flatwoods monster; she has a round, blood-red face, a large pointed "hood-like shape" around the face, eye-like shapes that emit a red light, and a dark black body. Mitsuko has small, claw-like hands with 3 claws on each, and her head resembles the ace of spades. She is able to fold her body into a big chair, and has the ability to glide through the air.

Mitsuko seems to have a strong affinity with the number three, often using the number as a verbal tic. She also enjoys scaring children more than eating, which Zuwijo used to his advantage in having her lure Yudias to the the abandoned factory he was hiding in with urban myths that were scaring children in order to have Yudias Duel her.[1]

Mitsuki uses a LIGHT Reptile Deck. Her monsters are reptilian humanoids in nature and reference various urban tales that she drew inspiration from to keep people away from the abandoned factory Zuwijo was hiding in. Additionally, all her cards have "san" (including the Japanese pronunciation of "3/III"), in their names, with the "St." in Alien Count of the White Dwarf, St. Germain using the french pronunciation.