Miyu Sugisaki ( , Sugisaki Miyu)[1] is a character in the Yu-Gi-Oh! VRAINS anime. She was a childhood friend of Skye Zaizen, and she was one of the six children kidnapped during the Lost Incident. She is the Origin of Aqua. 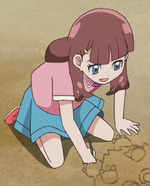 Full-body view of Miyu as a child.

Miyu as a child.

Miyu is a fair-skinned girl with grey eyes and brown hair that hangs down the nape of her neck with pigtails held by small yellow clips. She wears a pink shirt with a white lining, with a red bow around her neck, a blue skirt, and red shoes with white soles. After meeting Skye, she wore her hair in similar pigtails, including during the Hanoi Project.

Miyu is energetic and kind, befriending the sky and reserved Skye during their childhood. She felt guilty for Skye taking the blame of losing her mother's ring, and remained determined to meet her again someday and apologize for it, even during her traumatizing times during the Hanoi Project.

Miyu became friends with Skye Zaizen, and was her only childhood friend. One day Miyu lost her mother's ring, and Skye took the blame for its loss, resulting in Miyu's mother preventing them from seeing one another again. In the dub, Miyu's mother realized that Skye was trying to cover for Miyu, but Skye moved away the next day, preventing them from seeing one another. Miyu began wearing her hair in pigtails like Skye's afterwards, determined to somehow find Skye again and apologize to her.

Miyu was later kidnapped as part of the Hanoi Project. She was locked in a room and forced to Duel in a VR headset, where she would be electrocuted and starved if she lost. She became the Origin of the Ignis Aqua. During this time, Miyu continued to remember her promise to find Skye again, which motivated her to continue fighting. She was eventually rescued when Ryoken Kogami alerted the authorities of the Incident and returned to her mother.

Lightning exposed Miyu to a computer virus, plunging her into a coma. After she was freed from Lightning's prison, Aqua sought Miyu's help, but was unable to remove the virus from her. However, she was able to retrieve a fragment of her memories, which she later showed to Skye before teaming up with her to save Miyu.

When Playmaker, one of the other victims of the Lost Incident, defeated Bohman, Miyu was released from her coma. Skye began visiting Miyu as she recovered in Den City Hospital.