From Yugipedia
(Redirected from Momentum Express)
Jump to: navigation, search

Their work involved Ener-D (known as Moment in the Japanese version) related projects.[1] They also have a mysterious involvement with Iliaster.[2]

Clark Smith was the director of the company.[1]

Following the Three Pure Nobles's falsification of history, the company's existence was erased from history.[3] 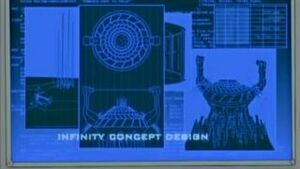 Infinity is a large machine built by Moment Express. It accelerates Planetary Particles in order to cause dimension distortion and create wormholes. The wormholes can be used to transport matter. Moment Express aim to use this as a form of space travel, which will eliminate the need to send rockets into space.[1]

Moment Express have some involvement with Iliaster. They phoned Lazar to warn him of the arrival of the Three Pure Nobles as the new directors of Sector Security.[2]

Yusei Fudo, Sherry LeBlanc and Bruno infiltrated the Moment Express building to find out more about their involvement with Iliaster. Sherry and Bruno managed to find a file about Iliaster after hacking into their computers. Sherry copied this onto a flash drive.[1] 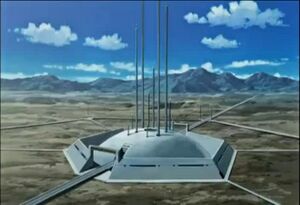 The Moment Express building has a hexagon-shaped surrounding wall. Inside is a large dome with several spikes jutting upwards.[1] 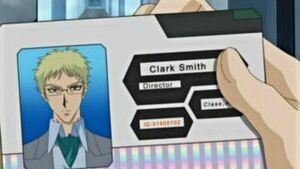 The building is divided into different levels. Higher levels require access keys to get into. The access key is simply slid through a device to open the door.[1]

The building has tight security. Various surveillance cameras are set up in the hallways. Facial recognition can be applied to people seen on the camera. Facial details are compared with those of people they have on file in order to identify them. Fingerprints can also be read and compared to people they have on file. This was used to identify Yusei Fudo and Sherry LeBlanc went they infiltrated the building, posing as employees of Bolger & Company.[1]

Infinity is contained within a large chamber. When not in use a platform is closed over Infinity. When in use the platform is opened.[1]

There is a series of tubes, which are used to test Duel Runners.[1]

The building has a food court which contains a number of restaurants, including Lucky Burger.[1]

Clark's office has a large monitor, which can split into four screens.[1]

Moment Express has a history with Iliaster and have done projects with Bolger & Company.[1]

Yusei, Sherry and Bruno infiltrated the Moment Express headquarters posing as employees of Bolger & Company, Daniel, Eva and Timothy. They managed to learn about Infinity. While Yusei tested a Duel Runner in the tubes, Bruno and Sherry hacked into the computer system, but were unable to find information on Iliaster. They suspected that the information they needed was hidden away in a higher level of the building, so they snuck into Clark's office to steal his access card. Unbeknownst to them, Clark had already identified them through the security system. When Clark went to his office, Sherry and Bruno snuck out through a ventilation shaft, while Yusei faced Clark in a Concentration Duel to buy them time. While they Dueled, Bruno and Sherry managed to copy a file on Iliaster onto a flash drive. After the Duel, Clark revealed that he knew their identities and set off an alarm. Yusei caught up with Bruno and Sherry and tried to escape. They ended up hiding in a shuttle, which was part of a trap. The shuttle was locked and moved to Infinity to have them transported elsewhere.[1]

The Three Pure Nobles, in an effort to erase traces of their conspiracy from Yusei and the others, used Infinity to alter history, causing Moment Express to disappear from existence.[3]