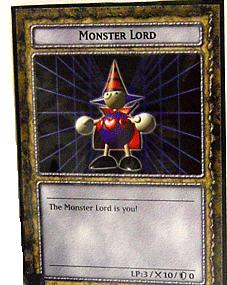 "The Monster Lord is you!"

The Monster Lord is unaffected by the effects of all monsters and items in play, except those that specifically designate it as a target.

Each Monster Lord has 3 HP, and takes 1 point of damage each time it is attacked, regardless of the ATK of the attacking monster. The Duel is won when a player destroys their opponent's Monster Lord; if both players' Monster Lords are destroyed at the same time, the duel is declared a Draw.