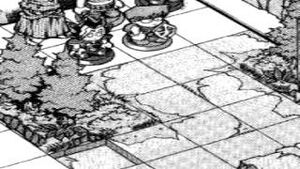 The inside of the forest.

The forest is a location in the Monster World game that Dark Bakura played with Yugi and his friends. 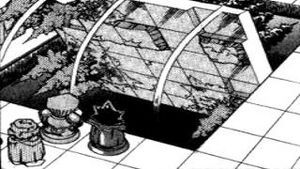 The forest being flipped over.

Since the forest is just an object on a gameboard, it can be flipped over to reveal an area inside it, that the player's figures can fit inside.[1]

Inside the forest, the monster encounter rate is 80%.[1]

At the start of the game, Yugi and his friends, who played the role of the adventurers, went to a village, to get information. Mr. Karita, who was forced to play the role of "Villager D" warned the adventurers to stay out of the forest as it was full of monsters.[2]

The adventurers later encountered Zorc, who was disguised as an injured man. He told the adventurers that he had been attacked in the forest and robbed of his sword, which was capable of defeating Zorc. He asked the adventurers for help. Although they had been warned to stay away from the forest, they decided to help him.[1]

Inside the forest, the adventurers encountered five monsters. They managed to tame Pokii and defeat the other four, after which Zorc revealed himself.[1]