From Yugipedia
Jump to: navigation, search
This article is about the location. For the card, see Mystical Moon. 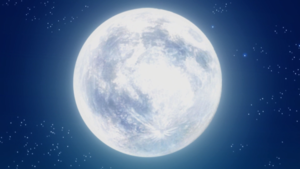 A full moon in Yu-Gi-Oh! SEVENS

The Moon ( Tsuki) is the Earth's only natural satellite. It appears in every Yu-Gi-Oh! series, and in addition to appearing on many cards, the Moon plays an important role in Yu-Gi-Oh! ZEXAL and Yu-Gi-Oh! SEVENS.

In Yu-Gi-Oh! ZEXAL, the Moon was created when the Numeron Dragon that created the universe shed a tear that impacted Earth, and it became the location of the key to the Numeron Code. The Numeron Dragon borrowed the power of the "Numbers" to create a spell to seal its power and tablets detailing a legend that could unlock its power in the form of a "Number", the Legend of the Dragons of Light and Time.[1]

Kite Tenjo, the holder of the Dragon of Light, "Galaxy-Eyes Photon Dragon", found another tablet inscribed with the legend at Jinlon's Number ruins and resolved to travel to the Moon to battle Mizar, the holder of the Dragon of Time, "Number 107: Galaxy-Eyes Tachyon Dragon". After the Barian Emperor Onslaught began, Kite and Orbital 7 used a spaceship to travel to the Moon, and once they arrived on the Moon, the power of "Galaxy-Eyes Photon Dragon" caused the tablets detailing the Legend of the Dragons of Light and Time to appear, destroying Kite's shuttle and forcing him to use Orbital 7 as a spacesuit. Mizar followed Kite to settle their rivalry, and Kite explained the legend to him before they began their final Duel.[1]

During the Duel, Kite evolved "Galaxy-Eyes Photon Dragon" into "Number 62: Galaxy-Eyes Prime Photon Dragon" using the power of the tablets. He also forced "Number C107: Neo Galaxy-Eyes Tachyon Dragon" to battle "Number 46: Dragluon", restoring Mizar's true memories of his past.[2] Kite defeated Mizar with "Prime Photon Dragon", but the damage of the Duel had damaged Orbital 7 and Kite's life support systems. "Number 100: Numeron Dragon" was released to Kite after the Duel, and he gave the card to Mizar before expiring on the Moon's surface from lack of air.[3]

The Goha Duel Server seen through the Hubbel Space Binoculars, with the Rush Duel program at the center

In Yu-Gi-Oh! SEVENS, the Moon is of great thematic importance. The urban legend of the King of Duels states that when the moon is full enough to be hardly recognizable, a Duelist will carve open a new path and guide the world as the King of Duels.[4] The Moon also serves as the location for the Goha Duel Server, where the data for Goha Dueling and Rush Dueling is stored by carving it into the lunar surface.[5] Goha Space Elementary was constructed to allow the Goha Siblings to monitor the Goha Duel Server.[6]

The Moon also plays a large role in the story of the SEVENS storybook, which is where Otes appears to have derived the legend of the King of Duels from. In it a young magician is tasked by an old wizard with gathering the "Sevens" to battle the Lord of Chaos who lives on the Moon, but the "Sevens" who represent the six elements all fall in battle and the Lord of Chaos is revealed to be the old wizard, having manipulated the magician into destroying the six elements and claiming the Moon was the last thing to be destroyed to save a world in turmoil, an act the magician tearfully carried out. Otes reenacts these events in the real world in his plan to destroy Dueling itself.[7]

Yuga Ohdo and Otes' final Rush Duel takes place in orbit around the Moon, aboard the Super Rush Robot and the Otes Robot respectively, as Yuga attempts to stop extra Dueling formats being installed on the Goha Duel Server from overloading and destroying it.[8] During the Rush Duel, Otes' servants attempted to attack the Super Rush Robot by uninstalling their Dueling formats and subsequently ejecting the constructs containing their data from the Goha Duel Server in the direction of the Super Rush Robot, though they were largely thwarted by Yuga's friends on Earth doing the same and Konvoy Sagawa's construct was stopped by the Goha Siblings aboard Super Mobile Fortress Sixross. As Otes appeared to defeat Yuga, the Duel was interrupted by his servants believing it was time to clock out and they flew the Otes Robot to the dark side of the moon, pausing the Rush Duel due to being out of communication range.[9] The Goha Duel Server's governance could not reach the dark side of the moon, allowing Yuga to continue his Rush Duel with Otes despite not having his Duel ID card, which he had rewritten into an extra copy of "Sevens Road Magician" to defeat Luke. Yuga successfully declared the final attack, but was forced to take both robots to lightspeed to avoid being disqualified when they re-entered the range of the Goha Duel Server. The sight of Yuga wearing the Goha Siblings' tiaras as a crown to control the Super Rush Robot and the full moon caused his friends to recall the legend of the King of Duels, declaring Yuga the true King of Duels.[10]