Mr. Kay, known as Ukyo Kitano (北野右京 Kitano Ukyō) in the Japanese version, is a character in Yu-Gi-Oh! ZEXAL. He is the teacher of Yuma's class at Heartland Academy. 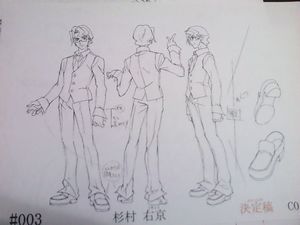 Mr. Kay appears wears brown pants and a matching vest, which covers a pink shirt. He has brown hair is with a dark brown fringes.

Mr. Kay is a professor at the Heartland Academy that Yuma Tsukumo attends, and was one of the characters possessed by one of the "Number" cards; "Number 34: Terror-Byte". While under the "Number" influence, he launched a Crashbug Virus throughout Heartland City, causing all electronics system to go haywire and caused mayhem.[1] After Yuma defeated him in a Duel, Mr. Kay revealed that he was planning a special spectacle where he used the city's matrix code of that image to materialized an image of "Crashbug" in the sky.[2] He seems to be the main teacher for Yuma's class, as seen during Parent's Day at Yuma's school.[3]

After Reginald Kastle returned to school after a long absence, Mr. Kay welcomed him and was relieved that he was back. When Shark was about to walk away, Mr. Kay mentioned how much Shark changed after meeting Yuma, stopping him in his tracks. Mr. Kay commented how special Yuma was, stating Yuma's "sun-like" power can changed people for the better, before watching Shark leave.[4]

Later that day, Caswell asked him to help Yuma find the Emperor's Key using the Crashbug Virus he created while he had a "Number". Mr. Kay was confused about this, but then accepted when Caswell blackmailed him with the threat of telling everyone that he was responsible for the Crashbug Virus incident. Using the virus, he located the Key and opened the door to the building where it was held for Yuma to go retrieve it.[5] He was able to override the building's computer network with his Crashbug virus, causing it to explode. At the Heartland Hospital, he was looking after Shark until the boy awakened from his catatonic state, explaining to him that Yuma saved him.[6]

Mr. Kay and Cathy in Heartland

Sometime after the World Duel Carnival, Mr. Kay was surprised when new student Ray Shadows loudly arrived to his class with Yuma in tow, exasperated by his behavior and the fact they were both late for class.[7] Later, he supervised Yuma's class during the voting for class representative.[8]

Mr. Kay was among the survivors of Heartland City who did not pick up a fake "Number" and be sacrificed to Barian World.[9] After the Barian World crisis was over and Earth was safe once again, Mr. Kay returned to his profession as a teacher for Yuma and his friends.[10]

Mr. Kay uses a "Crashbug" Deck revolving around Summoning his "Number", "Number 34: Terror-Byte". Much like the effects of his cards, his Deck represents what he has done - hacking into computer systems and taking control of them, launching "bugs" en masse, and wroughting many people (and the infected systems themselves) trouble because of it all.