Mr. Phoenix was the father of Aster Phoenix and a card designer for Industrial Illusions. In the Yu-Gi-Oh! GX anime, he created the "Destiny Heroes", while in the manga he created the "Legendary Planets". 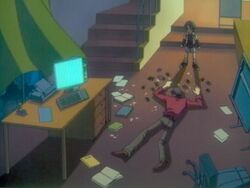 Aster discovers his father's body, surrounded by the "Destiny Heroes".

Mr. Phoenix worked as a card designer for Industrial Illusions. He eventually began creating the "Destiny Heroes". Seeing this as an opportunity, The Light of Destruction influenced Phoenix into creating a vessel to house it's essence. Though he tried to resist, he was unable to, and eventually created "Destiny Hero - Plasma". This card was infused with the Light of Destruction, who then began to seek a human host. By chance, Phoenix's son Aster let a design concept blow away in the wind, and in chasing after it bumped into The D, a criminal who was down on his luck. Aster mentioned that the card his father was creating would be one of the most powerful ever made. Knowing the money that he could make Dueling professionally, The D broke into the Phoenix residence that night to steal the card. The Light of Destruction inside the card influenced him, and he killed Mr. Phoenix in the ensuing struggle. In the English dub, Mr. Phoenix was said to be kidnapped, but his death was still alluded to by The D himself. This made his son an orphan, but The D adopted Aster in order to cover his trail.

In the next ten years, The D used the destiny-altering powers of the Light of Destruction to reign as the champion of the Pro League, while Aster grows into a strong Duelist who ranks high in the League himself despite only being fifteen. Aster had vowed to find his father's murderer, and Duels with "Destiny Heroes" his father created. He knew that when he found "Plasma", he would find his father's murder. The D eventually invited Aster to his yacht, and there he revealed the truth and Dueled Aster. In addition to his winning record in the Pro League, The D had competed in numerous underground Duels, where he had used "Plasma" to imprison the souls of countless Duelists. The first victim was Mr. Phoenix himself, who briefly communicated with Aster during the Duel. He urged his son to win the Duel, which would release the souls of the Duelists and purify the card. After some hesitation, Aster did so, thwarting The D's strategy via "Destiny Hero - Dark Angel" and attacking with "Destiny Hero - Celestial" to destroy "Plasma" and win the Duel. With this, the soul of Mr. Phoenix was finally able to rest in peace.

Mr. Phoenix could be seen during Franz's flashback amongst the employees applauding Chumley Huffington for creating a new card. For an unexplained reason, he was seen alive despite the fact that he should be dead a long time ago.

Mr. Phoenix in the manga.

Mr. Phoenix was a card designer. Due to this fact, Tragoedia chose him as a vessel. Tragoedia continued to raise Phoenix's son Aster while possessing him, with Aster none the wiser. While possessing Phoenix, Tragoedia created the "Legendary Planets", which he imbued with the power to sap small amounts of energy from Duelists who faced them. He also created the cards he would use in his personal Deck during this time.[1] When Phoenix's use was at its end, Tragoedia called for a meeting with Principal MacKenzie of the American Duel Academy. During this meeting in MacKenzie's office, Tragoedia released his hold on Phoenix and possessed MacKenzie instead, killing Phoenix in the process and taking the "Legendary Planets" from him.[2] Through MacKenzie, Tragoedia kept in contact with Aster, with Aster still unaware of his existence. He gave Aster "The Grand Jupiter" from the "Legendary Planet" series, telling him that his father would have wanted him to have it when he was mature enough.[3]