Mr. Stein, known in Japan as Professor Kouji Satou 「佐藤浩二, Satō Kōji」, is a Duel Academy professor only seen in the third season, though flashbacks indicate he was present in the first year, seeing as Chumley appears in one of them. A former Pro League Duelist who came from a poverty-stricken family, Mr. Stein fosters a grudge towards Jaden Yuki for ruining the interest of other students in his lectures because of the boy's position as the academy's top Duelist despite having his horrendous grades. This sets an example for others that they don't need to study to succeed, causing most of them opting to sleep through his classes. His grudge increased when his one good student, Alexis Rhodes, ditched his class, sending him over the edge.[2] 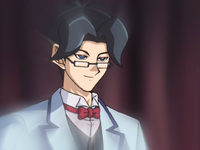 Mr. Stein in the Pro League.

During his days as a pro Duelist, he was also studying to become a teacher so he didn't have much time to practice. He once Dueled The D but fell ill before being able to complete the match due to his extensive studying. It is revealed that when Stein could no longer Duel professionally, "Scar-Knight" "transformed into a bitter hardened version of himself", creating the separate "Scab Scarknight". He tried to prevent Jaden from reaching Thelonious Viper in the lab where the monkey Wheeler was trained, but is defeated. Afterwards, when he attempts to pick up his precious "Scar-Knight" card, he seemingly falls to his death into the abyss.[1] In the dub, he is characterized as a parody of Ben Stein, particularly Stein's role in Ferris Bueller's Day Off. He is noted as having a dull accent. In the Japanese version, Satou quotes Uncle Ben Parker's famous line "With great power comes great responsibility" from Spider-Man.

In the dub Alexis refers to him, calling him Professor Stein, stating that he frequently messed up the saying "There are dumb questions".[3]

Later, Mr. Stein is seen when Jim Crocodile Cook uses the Eye of Orichalcum to look into Jaden's dark mind in a scene that was cut from the dub.[4]

Stein is seen one more time prior to Jaden's Duel with Yubel, as Jaden remembers all the people Yubel has wronged.[5]

Mr. Stein plays a Scab Scarknight Deck, which focuses on the abilities of the eponymous card (based on Unit 01 from Neon Genesis Evangelion) to gain control of his opponent's monsters.