Mrs. Andrews, known as Mrs. Okudaira in the Japanese version, is a character in Yu-Gi-Oh! ZEXAL. She is the mother of Nelson Andrews.

Mrs. Andrews is Nelson's manager, as well as an actress on his show, playing Galaxy Queen. She first appeared when her son was talking to Yuma Tsukumo, and forced Yuma out, as Nelson should concentrate on his role as Sparrow. She was shown to be quite cold and wanted her son to completely focus on his career.[1] 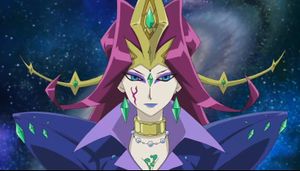 That evening, Number 83, when found by Nelson, designed itself to look like Galaxy Queen from the show, becoming Number 83: Galaxy Queen. Using its powers, the "Number" card made him believe it was his mother.[1]

During the Duel between Yuma and Nelson, she was brought there by Tori Meadows, and saw what had happened to her son. After the Duel, they reconciled, and she promised to let him be himself more instead of forcing him into his role.[2]